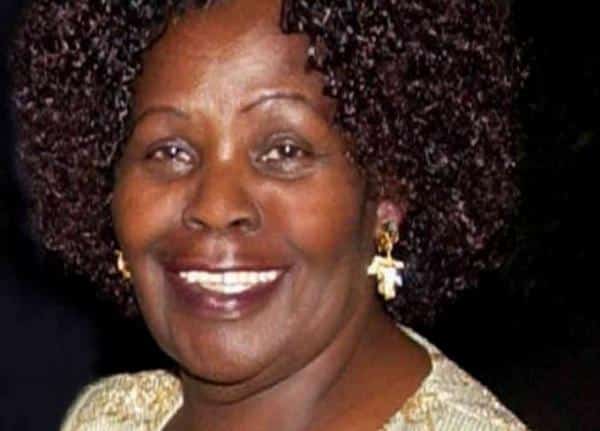 The picture that Kenyans have of the First Lady, Her Excellency Lucy Kibaki, is of a woman who walked into the offices of the Nation Media house and slapped some characters there for their negative depiction of her and her family. Also it is the rumors, or are they facts, that during a New Year’s night in Mombasa, she stormed into the party and disrupted the peace sending Charity Ngilu, Martha Karua, and others looking for the door. The most watched was when she stood on prime time television next to her husband, His Excellency the President, Mwai Kibaki, and looking mad as hell, he said that he has only one wife. This was to counter accusations, or are they facts, that, one, Wambui is also his traditional wife having taken cows, sheep, water tanks, and what the Kikuyu call, “miriyo” to her father’s house. But the most interesting is the speculation, or is it a fact, that the reason why the President has meetings in Harambee House is because people don’t want to go to State House, especially women, because they are afraid of the First Lady. I laughed when someone told me that women tiptoe in the State House, otherwise they might be heard and she would come and throw them out! . . . .Wow! A story is told that one day when the Cabinet was in session, she stormed into the Cabinet meeting and demanded that they finish the meeting quickly because her husband had another place he needed to be!
What human beings think about public figures is shaped largely by the reports in the media. In fact it is true that what we know is not shaped by our un-aided perception, analysis, and conclusions. Our thesis, antithesis, and synthesis is all directed not by personal research, but media reports. In the United States, the presidential candidate cannot be some Joe the plumber from Mims, Florida. In the last general elections, Rais Obama spent millions of dollars on advertisement. In fact this year, it is projected that the US presidential campaign will cost $1 Billion…. $1 Billion … my my my……dreaming about $1 Billion . . . . what it would do to Naivasha, Khuhumsalaba, Voi, or the hospital it would build in Kosirai, Nandi, or……Lord have mercy, sorry, I got dreamy for a minute. $I Billion! Wooooi!
Related Posts
NEWS

Anyway, the reason why the money is spent is to sell the product. Some camera lens controlled by some cameraman in a predetermination of a script written by some character approved by a press secretary, in a room controlled by a campaign manager. The picture is set and we the public watch on our television sets as Mitt Romney and Barack Obama try to sell us a product. Then we think we know the guys and based upon the strategic mathematical calculations of a press guy, we decide and we vote.
I have never met Esther Arunga. . . . who is she again? Oh, sorry, the media knows . . . . . !
In the same way, what I have come to think about Her Excellency Kenya’s First Lady is based largely on these media reports. I would like to sit down with her and have some mukimo with beef stew from nyama that a guy bought in a butchery where the meat was delivered that morning from some slaughter house in Dagoretti . . . . Yummy! Then I would ask, “Maitu, is it true that you got a muiko and forced His Excellency the President to walk out there and say you are the only one?” Yet again, I know you would like to be there to witness my ears being pulled and my face slapped around for asking “my mother” those stupid questions.
Anyway recently I sat in a place with very credible people. I mean credible because they are not reporters, they were people who know. The conversation turned to the First Lady again. It turns out that she cannot sleep at night when her husband is on a foreign trip. She worries about him so much that she has to be briefed almost every minute. The whispers said that she even asks about the weather to make sure that when he flies back into the country there will not be turbulence. She is happy only when he arrives back home in the State House. Given the reports, I did not want to believe that she is capable of that. Then I remembered my grandmother. A tough woman with a loud voice. Everybody in our village feared her because she commanded discipline and order. But when it came to my grandfather, a humble silent pastor, she called him father and he called her mother. My mother used to put a strong face every time my father was late from some church meeting or preaching service somewhere. She would say, “You know your father does not see very well at night.” Then when he would arrive late at night she would be the first to open the door to their bedroom and stand there while we opened the outside door for him.
Then I said to myself, “Self, this Lucy Kibaki is a wife, mother, grandmother first. I believe it is because of her the President is the man he is, confident, calculating, humble, and one who shuns nonsense and political innuendos. In fact every time the President is out in public, he is clean, well- dressed, and listens silently moving his lips as all the presidential-wanna-bes tell stories, chew each other up, try to trick him into saying huyu tosha.  All along he listens and dreams about that mukimo and uji waiting for him at the State House. If the First Lady is not, first, the protective wife, mother, and in this case grandmother, then the country would not have a mother’s heart. I believe Kenya was in the gutters during Moi’s time because there was no mother in the State House. In this case, I thank God, Kenya has a first lady who is also a wife, mother, and grandmother!
Teddy Njoroge Kamau, PhD, SYR/Radio/TV/Director: International Desk.Diaspora Messenger Contributor