David Nalo, Kenya’s PS in the Ministry of East African Community dies at a Nairobi hospital

David Nalo, Kenya’s PS in the Ministry of East African Community dies at a Nairobi hospital 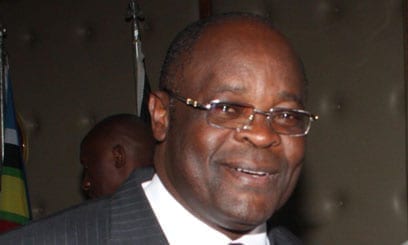 David Nalo, Kenya’s Permanent Secretary in the Ministry of East African Community is dead. The PS passed on early this morning at Nairobi Hospital after succumbing to a long battle with cancer.

He was diagnosed with Hodgkin’s Lymphoma cancer in February this year and had been undergoing treatment since then, including chemotherapy.

He passed on after having been admitted at the intensive care unit for about a week. Nalo is among a host of other public officials who have died from cancer.

Nalo is survived by a widow and five children.

PS Nalo mandate at the EAC ministry was to drive the objective of the EAC partner countries which included  expanding and intensifying economic, political, social and cultural integration.

This in turn would help improve the quality of life through increased competitiveness, added value, trade and investments. By all standards he has been able to achieve this milestone before his untimely death.

“As a journalist I found Ps Nalo very approachable and always available to answer questions from members of the forth estate. When he took over the ministry of EAC, he invited business journalists for a breakfast meeting where he requested for media involvement in the integration process where he also promised to be available to answer all the questions related. He lived to his word.  Nalo was synonymous with matters EAC integration.” Says Jane Kariuki, a TV news editor at KBC.

PS Nalo as most business journalists referred to him was always available to explain issue to do with the EAC integration process.

“He was only a phone call away for interview bookings or clarification on a  matter.  As President Kibaki noted, he was very instrumental in the establishment of the Common Market Protocol, Customs Union protocol, and the East African Common market union protocol. He dissected the integration and made it easy for us to report on the issues related,” she added.

The common market protocol came to effect on 1 of july 2010 allowing free movement of goods, services, Capital and Labour within the region comprising of Uganda, Tanzania, burudi,Rwanda and Kenyan.

Before he met his death PS Nalo had embarked on the establishment of the East African community political federation and the common currency for the region.

The head of state said the death of Nalo is not only a big loss to his family but the country at large which he served with diligence and admirable dedication in various capacities.

The disease has continued to claim many prominent people’s lives in the country as well as in the world ,the east Africa permanent secretary being the latest victim.

The other prominent Kenyan who succumbed to the disease is national commission integration commission deputy chairperson Mary Onyango who died of breast cancer.

The disease also left a vacuum in the leadership of this country when it fell veteran politician and former Butere Member of parliament Martin Shikuku and former Kiambaa Member of Parliament Njenga Karume who both died of prostate cancer.

The disease started making headlines in the country when the minister for medical service Prof Anyang Nyong’o went public about his health condition telling the country that he was suffering from prostate cancer however he was treated and now is free from the disease.

Following in his footsteps was his counterpart in the ministry of health services Beth Mugo who is now healed from Breast cancer which she has been suffering from for the better part of this year.

Internationally the disease has claimed the life of technology Guru Steve jobs who died of pancreatic cancer.

Husband flees after mother of six gives birth to quadruplets

Body of doctor who allegedly committed suicide in Cuba arrives

Video:Truck at the centre of Gilgil weighbridge drama released