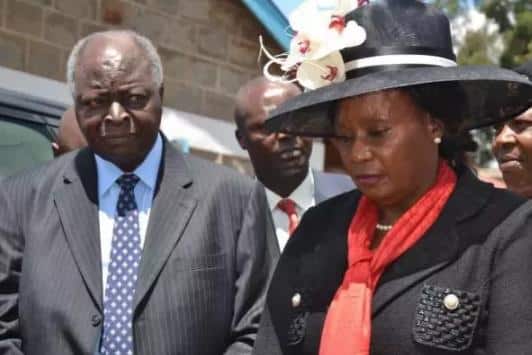 Businesswoman-cum-politician Mary Wambui, who caused consternation at State House over claims that she is President Kibaki’s second wife, wants to succeed him as Othaya MP.

Ms Wambui says that “when the time comes” she will be running for the seat on a TNA ticket, which is expected to be a boost to the political fortunes of the party’s leader Uhuru Kenyatta.

In an interview with the Sunday Nation, the flamboyant businesswoman spoke out on her family, business, her charity work and politics.

She also commented on her alleged association with drug dealers and her daughter Winnie Wangui’s life in the fast lane.

Ms Wambui, commonly known as Mama Winnie after her daughter Winnie Wangui, said she had five children. She did not say who the other four are. “I’m someone’s wife, I have five children and six grandchildren,” she said.

The businesswoman has been involved in Nyeri politics and the local high society since the 1980s but has not previously run for office.

In characteristic Kenyan political parlance, Ms Wambui said that Othaya people had pleaded with her to vie for Parliament when President Kibaki retires next year.

“As for now, this seat has the owner, and we should respect President Kibaki who is in charge. However, I must respond to the people’s call when that time comes,” she said.

She will have to battle it out in the TNA nominations with Nairobi lawyer Peter Gichuki King’ara who declared his interest to carry on Kibaki’s legacy four years ago and is vying for the same slot on the ticket.

President Kibaki’s eldest son Jimmy has also been said to be interested in the seat although he has not publicly announced his candidature.

“I have never funded any political party, and those who say that I am behind UDF are wrong … they should know that I’m in total support of TNA,” she said. “I’m a patriotic Kenyan and that’s why I always support people that have a good vision for the country.”

But she said all political parties, including TNA, should seek alliances, arguing that none can make it to victory on its own. Ms Wambui said she will not vie for the Ol Kalou parliamentary seat despite calls from a section of its constituents.

She says that although she has been receiving delegates from Ol Kalou urging her to vie for the seat, she will not contest there. Ms Wambui owns a farm in Ol Kalou.

She said she has known President Kibaki as “a good man” for many years and suggested that the Head of State may write a book in his retirement.

“There is a lot of work to do; Kibaki will probably write a book or come and farm, he is a farmer.” Ms Wambui said she is happy about her charity work and that’s how she would prefer to be known.

“The people here know me as someone who helps in taking children to school, involved in projects, and politics and of course helping the MP for Othaya,” she said.

Ida Odinga speaks out on her role in ODM campaigns

Celebrated TV Anchors Who Are Born-Again (Saved) & Not Ashamed

VIDEO: Diaspora Sad Stories And Challenges Of Kenyans In Australia