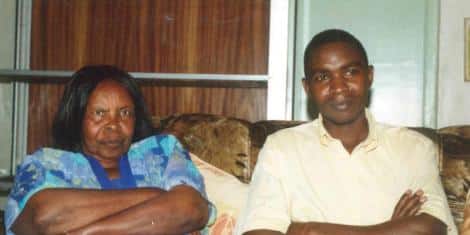 A battle over the division of property of the late fiery freedom fighter Wambui Otieno is set for the High Court between her children and the man who married her.

Peter Mbugua has started the unprecedented legal battle by objecting in court to a bid by Wambui’s two daughters to manage her estate.

He says he did not want the matter to end up in court but Wambui’s children have refused to co-operate with him.

“I am their dad and they should recognise their mother’s husband because I am also the next of kin,” Mbugua told The Standard On Sunday. This is the first case brought by a widower against his stepchildren.

There were varied public reactions to the controversial love affair between Wambui, then 67, and Mbugua, a humble man from Gilgil, resulting to a formal marriage 10 years ago. Mbugua was then 29.

Mbugua’s mother, then aged 53 years, refused to accept Wambui as her daughter-in-law. Wambui’s daughters boycotted the wedding, furious at their mother for marrying a man 42 years her junior.

Wambui died on August 30, 2011, of a heart disease. Mbugua has through his lawyer, Judy Thongori, filed an objection to the gazettment of Wambui’s two daughters, Gladwell Otieno and Rosalyn Otieno.

“All I want is for my rights as Wambui’s husband to be respected,” Mbugua said. Gladwell, a well-known NGO activist, is the Executive Director of the Africa Centre for Open Governance.

He is contesting the authenticity of the will he says does not equitably provide for him as Wambui’s husband. The will was made two months before Wambui died.

Mbugua says he did not file an objection as a way of seeking favours from Wambui’s children, but only for the court to accord him what is rightfully his.

He says he went to court because Wambui’s children refused to have the matter resolved amicably. He filed the objection on February 14.

“Take notice that Peter Mbugua Nyambura hereby objects to the making of a grant of probate of the last will of Edith Virginia Wambui Otieno as sought in the petition of Gladwell Otieno,” reads the objection.

Gladwell and the sister filed the application to be allowed to manage their mother’s estate on May 9, last year. Mbugua says he is interested in the estate as the widower and beneficiary.

He is contesting the will presented by the two daughters, which he argues was not made by Wambui.

“The deceased did not have the necessary mental capacity to know what she was doing at the time of making the will due to the illness,” says Mbugua. The will is dated June 18, 2011.

He argues Wambui did not sign the will as claimed by the daughters because she was very ill then. The will recognises 18 beneficiaries. They include Wambui’s children, and grandchildren. Mbugua has also had two bank accounts Wambui operated frozen until the succession dispute is resolved.

The will indicates Wambui gave Mbugua two plots – one in Kitengela and another in Namanga. The plots are held jointly by Wambui and Mbugua.

The money whose amount is not known, is to be spent on the education of Wambui’s grandchildren and great grandchildren.

Mbugua’s lawyer is expected to seek a hearing date soon at the registry. Wambui’s daughters are represented by Rachier and Company Advocates.

According to Wambui’s autobiography, Mau Mau Daughter: A Life History, she fought for independence and was briefly detained by the colonial government in 1961. After release from prison, she married fiery lawyer, the late SM Otieno, despite her parents’ objections.

When her husband died in 1987, Wambui was drawn in a protracted battle with her husband’s clan, Umira Kager, on where to bury SM Otieno.

When the High Court ruled SM Otieno was to be buried in his ancestral home, Wambui and her children boycotted the burial.

Also a politician, Wambui formed her own party, Kenya People’s Convention Party that she used to run for the Kajiado North parliamentary seat. She was heavily defeated. In 1997, Wambui also unsuccessfully vied for Kamukunji parliamentary seat on a National Democratic Party ticket.