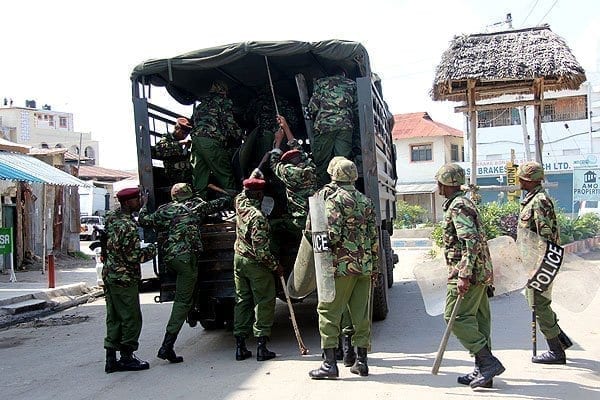 A top Anti- Banking Fraud Unit officer and a senior city cop have been linked to the thriving pornography business in Nairobi.

Police sources say the man based at the Central Bank of Kenya is a major investor in the sex sector while the security chief uses his extensive connections to offer protection. The revelations come as Kenya remains gripped by reports of alleged bestiality, which has since been denied, in Mombasa involving 11 young women purportedly at the behest of Swiss national Christoph Clement Weissenerider. In court, the women have been charged with prostitution while the foreigner is accused of luring them into it. The Twitter hash tag #PornDeDog, has been trending as Kenyans on social media express their wonder and wit.

Coast police have also alleged that the Swiss and a woman accomplice on the run have been running a similar dirty business in Nairobi, mostly to serve fee-paying foreign customers.

The last time such an incident created so much public debate was in 2009 when Nairobi-based American pastor, Thomas Kevin Manton of Dominion International church, was accused of recording sexual encounters, purported to involve him and local girls, on DVD for commercial use. The man of God was however acquitted by chief magistrate Uniter Kidula a year later for lack of evidence. The American had pleaded his innocence, saying his accusers wanted to grab his wealth and bring down his ministry.

But as the current debate continues, our investigations indicate that a spacious cybercafe at a building near the junction of Tom Mboya and Ronald Ngala streets is a major hub for recruiting actors in pornographic videos. The facility is also used to edit and duplicate the dirty discs for mass distribution locally and internationally. Financiers, producers, marketers and actors usually meet there, but the shooting of the videos is done in multiple locations in the city centre and residential estates, mostly in the leafy surburbs.

“One thing I am sure of is that I can never be raided by the cops. As long as he is around, I am safe. The top cop never comes here, but we meet at a club in Westlands,” says the producer.

He says those involved in the business need protection — which cascades to the vendors.

“No vendor will want to sell your wares if they are arrested,” he says.

The producer, in his late 20s, is well groomed and drinks the finest whiskeys. He drives a modest Toyota Alex and intends to import a Mark II before the year ends. His closest friends do not know what he does for a living. They think he is in the ICT business.

The producer said apart from same-sex scenes, there is a high demand for homosexual movies, which sell at double the price (usually Sh1,000). He is, however, not aware of child pornography, which he said is highly secretive.

The producer we talked to said he makes 80 per cent of his sales online. He also has two websites and one blog where interested buyers send him money through mobile money transfer services. Delivery of the physical DVDs is done by a motorcycle rider while customers upcountry are sent their packages of pleasure through courier.

On average, he makes up to Sh100,000, after production costs from sales of the movies. In fact, the producer said like a musician who earns royalty, his old movies continue to sustain his profits for years.

“I was paid Sh10,000 to act with two men,” she said, adding that she will not mind doing it again, but at a higher rate.

Karua said her stripper housemate was recruited by a white customer for a group sex movie at $200 (Sh16,600)

“When she came home with the money, the next time she was to go back to the mzungu, I asked if I could come and that was my first movie. Unfortunately, the mzungu was on a short visit and he went back to Europe. I don’t know if he ever sold our videos,” she said.

In August 2011, US authorities indicated that Kenyans were among those involved in an international child pornography syndicate that thrived on the sharing of images over an exclusive members-only internet facility, Dreamboard.

US authorities then described the year long Operation Dalego as one of their biggest moves against child pornography, but the encryption of the site made it impossible to identify all those involved. It is said members shared images of adults sexually abusing children — some of them children.

Nairobi police never opened their own investigations on the syndicate even though the then city police boss Anthony Kibuchi said in August 2011 alone they had arrested at least 10 people over involvement in pornography.

Involvement in pornography or the handling of pornographic material is illegal in Kenya. But like prostitution, it continues to thrive.

However, in the wake of the Mombasa incident, whose connection to the capital have been established, city police have mapped out areas where pornographic activities take place. Our sources indicated that parts of the city centre, Westlands and Hurlingham, host the main spots. So serious is the situation that it came up at a recent security meeting convened by Governor Evans Kidero.

Police say they had information that prominent people frequented brothels where young girls are being exposed to sex, while others are involved in producing pornographic material for commercial use.

“We are organising with the City Inspectorate to raid those brothels. It is something we discussed last week with the Governor, who was concerned,” said Nairobi police chief Benson Kibue.