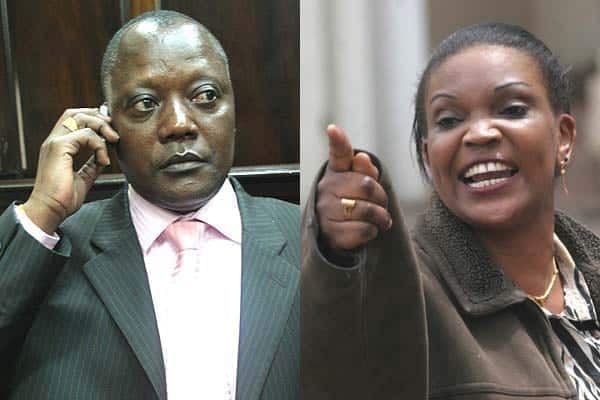 The five were carrying a white powder from Tanzania when they were arrested at a roadblock.

Police say they are yet to know the nature of the drugs and if the powder is a narcotic.
Head of anti- narcotics unit Hamis Masa says they are detaining the five for further investigations.

“We arrested them with a powder that we think is a drug. The powder has been sent to government chemists for further tests and analysis,” said Masa.

Other officials said the former MP and Akinyi have been on their radar of drug trafficking.

They were being detained at the Muthaiga Police Station.

Two women and a Congolese man have been charged with trafficking Narcotic drugs valued at Sh 5,588,580 contrary to section 4 (a) of the Narcotic Drugs and Psychotropic substances control Act of 1994.

They were accused that on July 13, 2019, at Deep West Resort within Nairobi, they trafficked heroin.Akinyi and Omondi are further charged with possessing forged Democratic Republic of Congo passports contrary to section 54(1)(c) of the Kenya Citizenship and Immigration Act No. 12 of 2011.

They have all denied the charges.Through their lawyer John Ogada, Dorcas Osabwa and Elvis Abenga the accused pleaded with the court to be released on favourable cash bail.

In her ruling, Senior Resident Magistrate at JKIA Law Courts, Christine Njagi released Joyce Akinyi and Peris Omondi on a bond of Sh 2,000,000 each with two sureties of the same amount.“The two persons should report to the police station once every week and not travel without informing the Court,” ruled Njagi.

The court, however, denied Congolese national Pauline Kalala bail due to compelling circumstances in his case and that he had no known contacts in Nairobi and investigations were still going on.