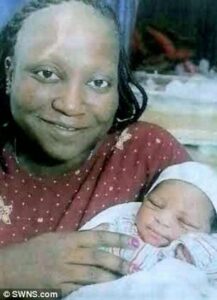 Kenyan Woman gives birth in Heathrow Airport toilets moments after getting off a plane from Kenya. Staff at Heathrow Airport were asked to deal with an unexpected arrival last week, when a heavily pregnant woman began giving birth in a toilet just minutes after stepping off a flight. Ragina Hamisi, 33, went into labour in the middle of the arrivals hall only moments after arriving back in the UK on a flight from Kenya on New Year’s Day.

The support worker, from Barking in London, was forced to give birth to her as-yet-unnamed daughter in the nearest toilet as there was no time to transport her from the airport to a hospital.  Unexpected: Ragina Hamisi (left) gave birth to a baby daughter in a toilet at Heathrow Airport’s arrivals hall on New Year’s day.

The unnamed baby (right) arrived three days before her predicted due date. Ms Hamisi had not been due to give birth until January 4, but a family emergency forced her to travel to Africa for the Christmas period.  It wasn’t until she stepped off the plane that Ms Hamisi realised her baby was on its way, at which point she asked airport staff to help her to a toilet. Ms Hamisi, who already has two children, says she remembers little of the birth other than it taking place in the arrivals hall toilet.

Speaking of the birth, Ms Hamisi said: ‘All that I remember after getting off the plane is a medic and being in the toilet. I delivered my baby right there on the bathroom floor.’ Surprise arrival: Ragina Hamisi reaslied her baby was on the way while standing in the middle of Heathrow Airport’s arrivals hall (pictured). The support worker had only stepped off a flight from Kenya moments earlier.

The new baby, who was born weighing 6lb 4oz, is a sister for Ms Hamisi’s two other children, Melissa, five, and Jayden, who is 18 months. She says she will name the new arrival at some point over the next few days. A Heathrow Airport spokesman confirmed a baby had been born on its property on New Year’s Day. Ms Hamisi said had been allowed to take the flight because she hadn’t told Kenya Airways she was pregnant. Many airlines, including Kenya Airways, discourage expectant mothers from flying after 28 weeks.

Kenya Airways say they do not allow passengers to board after 36 weeks for a single pregnancy, or after 32 weeks for a multiple birth. There have been several babies born in airports in recent months. In November Emily Ortega, 21, gave birth in the middle of a typhoon-devastated airport in the Philippines. During the birth the destroyed airport was turned into a makeshift medical centre, with her bed a piece of dirty plywood resting amid dirt, broken glass, twisted metal, nails and other debris.

And last February an unnamed woman who didn’t realise she was pregnant gave birth in the middle of Edinburgh Airport’s departure lounge while hundreds of people were preparing to board flight. – sisiwakenya.com