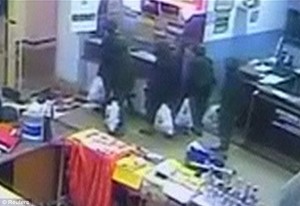 In the latest video clips posted on YouTube, the four soldiers are seen walking into the branded and well lit shop and picking up mobile phones and other gadgets and passing them to each other.

These comes two weeks after KDF wrote an internal report on the Westgate terror attack that categorically stated that soldiers did not loot at Westgate. The report also denied claims that the soldiers drank alcohol at Art Cafe in Westgate.

In the recently released clips, the first soldier is seen walking past the shop with his gun at the ready before he walks back into the shop to the left side of the shop and he is shown picking something from the display counter.

He is joined eight seconds later by two of his colleagues, one of who pushes a shopping trolley out of his way before walking into the shop where the other soldier is busy ransacking the display counters.

They are joined fifty one seconds later by a fourth soldier who is carrying a paper bag in his left hand and proceeds to tack it under his armpit before he too starts grabbing and looking at mobile phones.

One of the soldiers then flips open and walks around the counter and proceeds to ransack drawers as his colleagues look on.

The clip looks like that of the three soldiers who were dismissed from KDF immediately after the looting allegations by KDF were made but the military bosses have said that investigations are ongoing to establish if those in the clip are still in the force.

“Following allegations of unprofessional conduct by KDF deployed at Westgate Mall, a Board of Inquiry was set up to look into the claims. The on-going Board of Inquiry has been able to identify and take disciplinary measures against those troops so far found culpable. Findings from the board, information from the public, physical evidence & clips such as https://www.youtube.com/watch?v=8USnm-ETjBU , among others have been used as evidence,” KDF Public Affairs office said yesterday.

The military said that the KDF Operational Training and Doctrine does not condone any unprofessional misconduct by its soldiers or officers.

“It is our desire to continue to maintain our professional core values. Investigations are still on-going. Any KDF personnel found culpable will be dealt with in accordance with the Law,” the KDF statement said.

An inquiry ordered by the Commander of the Kenya Army Lieutenant General Joseph Kasaon began its investigations on October 9 2013 at the Kenya Army headquarters Officers Mess.

So far officers and service members who took part in the rescue operations have been interviewed and the team has toured Westgate shopping mall.

“Cases of theft by individual soldiers have have emerged and disciplinary action preferred in accordance with KDF Act Sec 121 which provides for dismissal under such circumstances.

The soldiers involved were Victor Otieno, Victor Ashiundu, both of whom have been dismissed and jailed. The third soldier Isaiah Wanjala is under investigation,” KDF said. KDF, however, insists that allegations of looting leveled against KDF as an institution are unfounded.