In a busy day that started with a function at State House, Nairobi, and included a visit to the Nairobi National Park in the afternoon, the two leaders announced a deepening of ties in what observers see as an affirmation of the Jubilee government’s commitment to widen the network of trade and development partners around the globe.

Traditionally, Kenya has relied on Western development partners, but it has in the last decade attracted the Asian economic powerhouse, which has been aggressively expanding its interests across Africa.

The agreements signed yesterday touched on various segments of the Kenyan economy and diplomatic relations with China. President Kenyatta’s plan to build a modern railway is a key highlight of the Premier’s visit.

After talks, the leaders are today expected to formally sign the agreement on the multi-billion-shilling standard gauge railway (SGR) project that is expected to boost trade links between Kenya, Uganda and Rwanda.

“Our talks, and the agreements we reached this morning, covered a variety of matters, but allow me to mention just three: the standard gauge railway; the protection of our national heritage; and our region’s peace and security,” President Kenyatta said.

The SGR is expected to cost Sh327 billion for the Mombasa-Nairobi phase with China funding 85 per cent of the project while the other 15 per cent will be provided by the Kenya government. President Kenyatta noted that the partnership in the development of the railway will change the region’s economy and affirm Kenya’s status as a transport and economic hub.

The leaders also agreed that a China-Africa Development Bank would be set up in Nairobi and Beijing would pump in about Sh170 billion ($2 billion).

Another major project is a China-Africa Research Centre that will be funded at a cost of Sh5.1 billion.

It was also announced that the troubled South Sudan would benefit from the Premier’s visit with Beijing putting in $8 million (Sh748 million) through the regional Inter-Governmental Authority on Development for humanitarian assistance.

President Kenyatta stressed that the Kenya government was keen on ensuring a steady relationship with China. The President said that Nairobi’s ties with Beijing had led to improvement of infrastructure over the past 12 years.

“A critical lesson we have drawn from China’s remarkable growth over the last three decades is that prosperity is achievable with proper planning and prudent investment,” he said.

President Kenyatta added that Kenya and China will continue to deepen mutual investment and trade ties. He affirmed his government’s commitment to investments, policies and reforms that would enhance Kenya’s business environment to make it the first choice for investors.

“My government is committed to making Kenya the manufacturing and technology hub of Africa. We also want to make Kenya both the first choice of outside investors, and the home of the most energetic local entrepreneurs,” he said.

In an apparent appreciation of the impact of recent terrorism threats blamed on Somali-based Al-Shabaab, President Kenyatta said Kenya is keen on enhancing the capacity of the security agencies to combat such threats.

On regional security, President Kenyatta acknowledged China’s invaluable support on peace and stability, saying intervention by Amison, which includes Kenya Defence Forces, had stabilised the situation in Somalia and had limited the acts of piracy along the East African coast.

The two leaders did not disclose the actual financial value of most of the agreements and protocols signed but their aides who spoke to the Sunday Nation said the deals run into billions of Kenya shillings with implementation expected inside five years.

And while addressing a joint press conference at State House, the Chinese Premier, whose visit has stirred excitement, said his government would help in the establishment of an industrial park to support Kenya’s manufacturing sector.

“We are going to assist in the development of an industrial park in Kenya to support the manufacturing sector and aid economic growth,” Mr Li said.

The Chinese government also pledged support for the repatriation of Somali refugees residing in Kenya.

The issue of balance of trade which favours Beijing also came up with the Premier regretting the imbalance and promising that his government was working on helping Kenya to close the gap.

On wildlife conservation, which has been in the spotlight following increased poaching partly blamed on growing demand for ivory and rhino horn in China, Mr Li announced a Sh860 million ($10 million) financial support for wildlife conservation in Kenya and the continent.

At the National Park, where the two leaders visited the Ivory Burning Site Monument, the Chinese leader said his government was sending a clear message that it supports wildlife protection.

During the State House meeting, the first agreement signed was on economic and technical cooperation approving grants of undisclosed value.

The two further signed an agreement of undisclosed value of interest-free loans to be offered to the Kenyan government by China and a framework agreement on the provision of concessional loans.

It was unclear what some of the intended loans and grants from China would fund.

Other MoUs on health cooperation, forestry and ecological conservation, and establishment of a cultural centre were also signed.

Educational issues which are part of Mr Li’s high-profile visit saw an MoU on the establishment of an ultra-modern joint laboratory for crop molecular biology signed which will cost Sh5.1 billion.

Mr Li, who is accompanied by his wife Cheng Hong, will leave tomorrow having also toured Nigeria, Ethiopia and Angola. 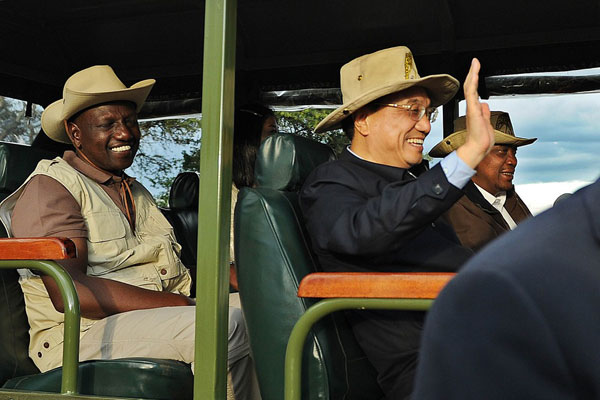