NAIROBI, Kenya, May 28 – The Jubilee coalition on Wednesday announced the cancellation of their rally that was scheduled to take place in Kajiado this coming weekend.

The ruling coalition’s Majority Leader in the National Assembly Aden Duale said they chose to call off the rally after talks with Inspector General of Police David Kimaiyo.

“For us we are telling the country that we have no rallies following the talks with the Inspector General who shared with us the intelligence that prompted him to make the decision he did yesterday.”

“We want our counterparts in the opposition to have a chance to welcome their leader and we wish them well in Uhuru Park or any other venue that they will be given,” Duale announced.

He however asked the Coalition for Reforms and Democracy (CORD) not to use its rally at Uhuru Park on Saturday to incite the public.

“We have also asked the IG to write and explain to the public why he made that decision yesterday and never again should he issue that kind of pronouncement without meeting the leadership from both sections of the coalitions,” he added.

Senate Majority Leader Kithure Kindiki said that they have no problem with CORD welcoming their leader but urged the coalition to maintain peace and desist from dividing the country on ethnic lines.

“We are concerned that perhaps what is happening in the country could lead it to the wrong path.”

“While we appreciate that CORD have a right to welcome their leader, they can sing, pray and dance for him because we are sure that they are happy that their captain is home but at the same time we are telling the people of Kenya that this country requires responsible politics.”

“We cannot be seen to be dividing our country and therefore we have told the IG that we expect his men and women to be vigilant and track down all politicians who might be inciting Kenyans to violence and we hope that we has heard us,” Kindiki warned.

Earlier on Wednesday morning, Kimaiyo allowed CORD leaders to hold their weekend rally which he had cancelled on Tuesday.

The change of heart came after a meeting between Kimaiyo and CORD leaders led by Moses Wetangula, James Orengo and Farah Maalim.

“The Inspector General of Police has assured us that they will provide us with adequate security after allowing us to hold our rally at Uhuru Park on Saturday,” ODM’s Deputy Communications Director Maseme Machuka told Capital FM News.

Kimaiyo had on Tuesday cancelled all political rallies and demonstrations in the country until further notice.

He said in a notice issued by Administration Police spokesperson Masoud Mwinyi that the order was prompted by the current security situation in the country. 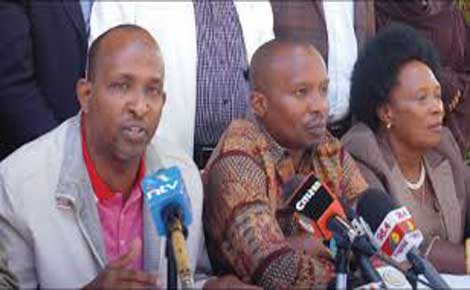