Mr Linturi’s absence in the House to give his “notice of motion” effectively means that despite being approved and allocated time, his motion has lapsed on a technicality.

Mr Linturi had told the House on Tuesday evening that he would officially inform the House of his intention to bring the motion on Wednesday afternoon.

But he did not do so and MPs were expecting that he would do it Thursday afternoon before the Budget Policy Highlights are read by the Cabinet Secretary for the Treasury.

“I’m standing on behalf of those who signed the censure motion. We want to know whether that was a game or that motion has been withdrawn,” said Charles Mongare (North Mugirango, ODM).

Mr Mongare was referring to Speaker Justin Muturi’s ruling Tuesday evening that whenever a special motion is filed, approved by the Speaker and a time allocated, the MP sponsoring the motion must give a notice to move it within three sitting days.

“I did give the mover three sitting days starting Wednesday morning, Wednesday afternoon and Thursday afternoon. That is the ruling of the chair. Just read the Standing Orders,” said Mr Muturi.

Majority Leader Aden Duale chipped in with the assertion that, “If the Hon Linturi is not here, then I think his motion is dead.”

Ms Waiguru was hailed by MPs when she entered the chamber in the company of her Treasury counterpart.

After the reading of the Budget, a section of the Cord MPs left the House chanting, “Linturi Must Go.”

The lapse of the motion brings to an end protracted political activity over the past month Mr Linturi has been talking about his motion.

Signs that it wouldn’t proceed emerged at a breakfast meeting he held at the Panafric Hotel on Wednesday morning to talk to the MPs who had signed his motion.

About 40 showed up and there were reported to be disagreements, leading to a walkout by Major (rtd) John Waluke (Sirisia, Ford-Kenya), Suleiman Dori (Msambweni, ODM) and Thomas Mwadeghu (Wundanyi, ODM).

“We don’t like what Linturi and his team are doing. We signed this motion and we have to stand firm,” Maj Waluke later told reporters. 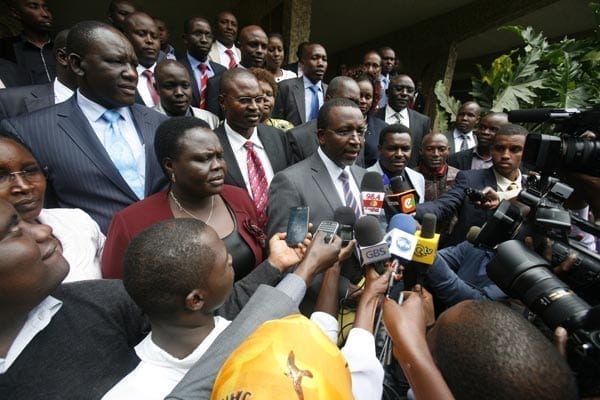