A group of Kenyans in the UK have upscaled technology to roll out a new radio *broadcasting platform known as Taifa Radio, which will be hosted on the website diaspora.fm

It is an initiative launched by the Kenyan Diaspora community, to champion in airing of their issues, inform, share and entertain East Africans based outside the mother land.

At the heart of this project is the use of digital technology in support of vision 2030, as the radio will operate on different smart gadgets including smart phones, smart TV, tablets, laptops , the traditional desktop computers and in some areas in UK on FM receivers.

The radio station seeks to mobilize East Africans in the diaspora, to create closer ties as well as making it easier for East African businesses to promote their products to the targeted market.

Among the interesting programs to be aired are ;

1. Gospel Sundays, aimed at providing religious education and entertainment  to the community.

2. Salamu Sessions, that will allow audience to interact across the globe by sending greetings to each other on air via radio.

3. The main show will be aired Monday to Thursday from 7pm to 10pm UK time. It’s a live interactive show that will feature current affairs discussions including on air phone-in to enable the diaspora community an opportunity contribute to the current issues. 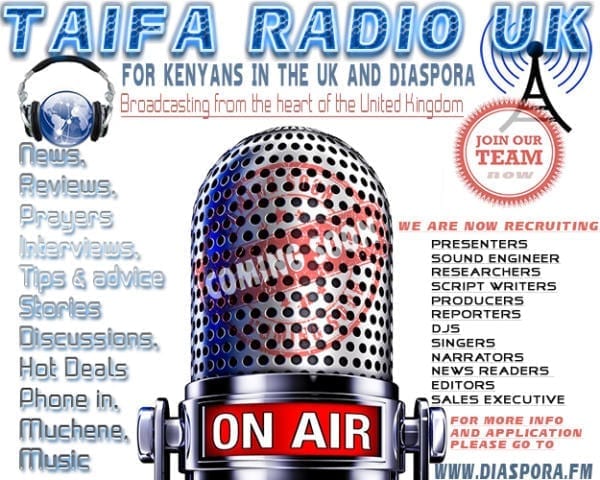 Taifa Radio is set to transform communication abroad, as it’s at the epicentre of the community. It will work with the people, for community enhancement through various weekly programmes. The East African community will be galvanised by this innovation via peer to peer and web forum as well.

The studios of Taifa Radio UK will be situated in London, Oxford, Watford and Nottingham but the four will be switching seamlessly between each other with plans to expand to other territories are being put in place.