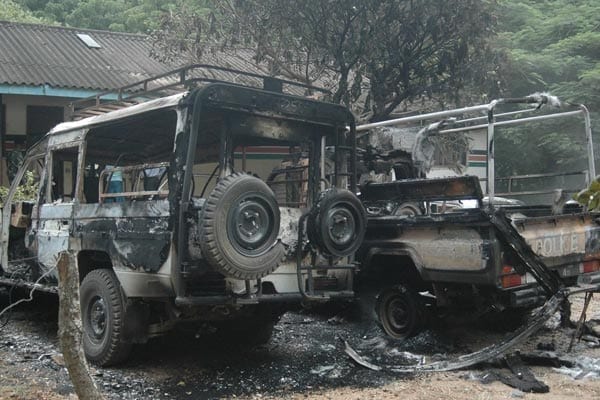 Kenyan celebrities are not happy with the handling of the double Mpeketoni Attack that left over 60 people dead. They took to their social media networks to express their displeasure at the leadership, both at government and opposition.

Actress Lizz Njagah Konstantaras wrote, “Why are y’all surprised? You’re on your own. All I wanna say is they don’t really care about us.. They drive mercs and travel to exotic places on holiday and if war breaks out in Kenya (they will be on the first flight out) Kenya is bigger than any one of us and it is waaaaay bigger than them. Don’t pander to the whims of the have mores.”

Entrepreneur and singer Muthoni Ndonga ‏wrote, “So sad. So heartbroken. We are a terrified terrorized people. Every time leadership talks, we feel less and less assured.”

Award wining singer, Amani advised, “The way politicians are behaving, we should get them an arena,a couple of sticks and watch them duel…like Game of thrones…”

Radio presenter and singer Sanaipei Tande ‏wrote,”The Only Matter To Be Dialogued Btwn Govt & Opposition At This Moment Should Be The Safety & Protection Of Kenyans! #IfYouCare.”

She added, “Stop pointing fingers (Opposition) Stop creating excuses (Govt)! If you truly CARE about the Safety & Progress of Kenyans, UNITE & Prove it!”

News anchor Nimrod Taabu asked, “Why do we always pledge action against perpetrators when we haven’t even arrested them?…so that we can scare them or what?”

Self proclaimed crown prince of Benga, Dan ‘Chizi’ Aceda wrote, “It’s Ok if you want to talk politics. That’s your right and I respect that. I would just like to remind you that 48 Kenyans died there yesterday. What did they die for? The first responsibility of the state is to protect its citizens. So far we can’t even convince the president to give a speech. This is how low we are right now. Think about this as you go about your business today. If a gang of people carrying guns showed up, who would protect you? This my friends is the real issue.”