Lenku said even as security forces continue investigating the cause of the attack and hunt down the perpetrators, they would pursue a possible political motive in the latest killings.

Lenku told a press conference that once investigations are complete, action will be taken against the perpetrators “and those inciting violence.”

While making reference to his recent warnings to CORD politicians who have been holding rallies across the country, Lenku said the red line had been crossed but did not elaborate.

“Recently, I issued a caution to the effect that there is a line beyond which nobody should cross. This red line has now been crossed,” he declared.

“Those engaging in incitement of the public will be firmly dealt with in accordance with the law.”

Asked if he was linking CORD leader Raila Odinga’s utterances to the attacks, Lenku responded: “His history is a book Kenyans have seen and read and know. It is not me to say it because it is in the public domain of his political activities.”

He added; “the politicians are hereby warned to desist from inciting the public.”

“I am now headed to Mpeketoni in the company of senior security officers to oversee the ongoing security operation and support our security services that are pursuing the criminals, and will brief the country accordingly,” he said.

The Cabinet Secretary notably made no reference to terrorism over the Lamu incident and dwelt on asking politicians to stop inciting their supporters.

“I wish to assure the country of the Government’s commitment to deal with political incitement and caution political leaders inciting the public to desist from destructive politics and ethnic profiling that may be responsible for this heinous act,” he warned.

Coalition for Reforms and Democracy leaders have been criss-crossing the country in what they term as ‘dialogue’ meetings in a bid to force the Government into a national dialogue conference.

CORD leader Odinga has warned of a storm if the Government fails to initiate dialogue before their main meeting on July 7, famously known as Saba Saba.

Lenku said the heightened political temperature was being raised, “through the activities we are all seeing. I caution those responsible to make sure that they do not pull the country into unnecessary anxiety and give impetus and embolden criminals.”

State House Spokesperson Manoah Esipisu while passing on the Head of State’s condolences announced that President Uhuru Kenyatta had called off his planned tour to Moyale.

“The President wishes to pass his messages of condolences to families of the bereaved and wish quick recovery to those who are injured,” he stated.

On the attack, Lenku confirmed that, “48 innocent lives were lost and over 20 vehicles burnt and property destroyed.”

The attackers are said to have fled into Boni forest.

Police believe most of those who died were shot and bled to death in their houses as they could not venture out to seek medical assistance after the gunfire raged for more than four hours.

The attack occurred when eight gunmen hijacked two vans at Witu and commandeered the driver to Mpeketoni where they opened fire indiscriminately at anyone they came across.

It is believed they were joined by their accomplices who were already in the town because witnesses said they saw more than 50 attackers.

Areas affected were Mpeketoni Police station, two hotels, a bank and a fuel station-with some facilities burnt down. 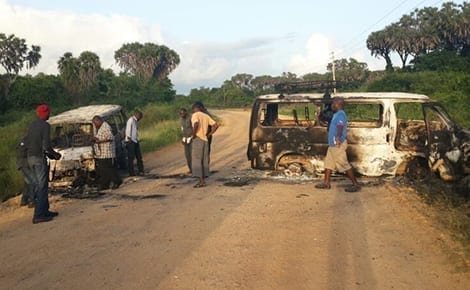