If you were Raila Amolo Odinga, you would also call for Saba Saba. Wouldn’t you?

Imagine flying first class to the United States as a Prime minister. You arrive at the airport to find the whole Kenyan diplomatic Corps at your service. Then get honored by American security services as a head of State. Imagine meeting the United States president and having a picture taken with him. Imagine staying in a 20 star hotel costing 20,000 dollars a night of other people’s money!

Now imagine that it is all gone! Gone, gone with the wind. People who are looking at the crisis facing Raila Amolo Odinga are not realistic. As a philosopher, I have learnt to withdraw myself from crisis and make analysis from reason and facts. Therefore bare with me as I make a purely rational argument for the Saba Saba day. It is important that students of political theory understand the underlying truth about what is going on in Kenya’s political history: Self preservation!

To organize a presidential campaign in Kenya, or anywhere is not cheap! I know this because I indulged myself in the 2012 political drama as a researcher to find the truth about democracy. I learned that campaigns are not cheap. For example in my county, the man who is now the governor came near my village. He had an entourage of 20 cars. He drove into the village in a Hammer. After he left, people were divided into groups. Border borders in one primary school room, women in another, men in another, and the youth in the biggest room.

Each came out with 1,000, 500, and 100Kshs. One of the campaign managers told me that they carried 50 Ksh. notes in gunias everywhere they went. Now, multiply that with 47 counties, 349 constituencies, over 2427 locations and millions of poor and desperate people trying to feed their families. Are you still with me? That is the crisis facing Raila Ondinga. Reliable sources tell HTBluff Associates that it got so bad for Raila, that even his wife had to borrow money from friends to campaign! You see, his friend Kalonzo is not wealthy: He just hitched a ride then and now!

To succeed, Raila Amolo Odinga borrowed money from his companies including the Molasses Company in Nyanza. That is why the employees are complaining of non-payment. To make the matters worse, he also got money from foreigners including Kikuyu Business men in United States who wanted to secure business deals! My, my, my! Are you still with me? Recently Raila Amolo Odinga came to the United States. When he arrived, there was no entourage, no diplomatic corps, no staying in 20 star hotels, and the Kenyan Americans who had given him money, were not too eager to host him. In fact it was reported that the Kenyan Ambassador did not want to attend his meetings.

Imagine the former prime minister calling up some Kenyan businessmen to request a meeting and begging them to pay for his first class flight across the United States! That is not easy. For those historians who do not like theories, speak to Miguna Miguna in private and you will record some interesting historical facts.

The Undetectable And Unique Characteristics Of President…

If you think Uhuru Kenyatta and his deputy do not know the inner stories, ask them how much they spent on the campaign in Kenya? Barack Obama spent over 100 million dollars for his campaign. Fortunately for those who become presidents, deputy presidents, MPs and so on, the money has a way of coming back home: One shilling at a time! Even if one does not get contracts, the privilege of spending tax payer money on cars and hotels out weighs any ethical argument. Did you know some governors are living in hotels waiting for their residences? Imagine that!

Saba Saba? Yes in the mind of Raila Odinga and his family, this is the only way out. I attended a fellowship in Mary land USA where a Kenyan Evangelist was to speak. When he took the pulpit he said, “I do not fly third class. I do not ware cheap suits. I do not stay in hotels under 5 star.” Then the organizer stood and said, “Let us bless our brother with our offering.” I said, “I fly third class. He flies 1st class. It is he to give me some so that I can also match his game!”

My father said, “politicians carry the public with a bag that has holes so that they can drop them along the way.” I say, Raila Amolo Odinga has the right to Saba Saba: It is his bread and butter! He should take an offering. Each of us needs to find our bread independently. We should not be forced to give an offering to his plate! 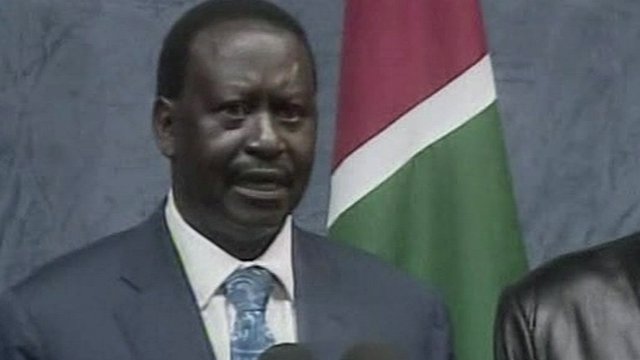