Kenya is looking to launch direct flights to the US, a goal that has been elusive in the past. The Transport ministry said this time round, Kenya Aviation Authority (KAA) has upped the quality of security screening, passenger handling as well as general security at the Jomo Kenyatta International Airport. And the Government is optimistic this will help the country get the American aviation authority’s nod to clear the airport as secure.

In the past, there have been concerns about mixing of departing and arriving passengers, as well as the general state of security checks at the airport. The ministry said the concerns have been addressed, with a clear demarcation between departures and arrivals as well as increased security. Transport Cabinet Secretary Michael Kamau said the US Transportation Security Administration (TSA) is currently doing audits at JKIA, adding that he would next week be meeting senior US transport officials, during which he said he would pursue the matter further.

“TSA has been on the ground at JKIA doing audits. These are key to getting direct flights to the US. We will implement the recommendations they will give to ensure our flight paths are safe,” he said.

“I will also meet with the Federal Aviation Administration and TSA officials next week in the US and pursue the issue,” he said. “Our passengers used to mix but we have now separated the arrival and departure and we are now dealing with minor issues. We expect to get a Category One status.”

Kenya has in the past unsuccessfully pursued transatlantic flights. A 2009 plan by America’s Delta Airlines to fly directly to Nairobi from Atlanta, Georgia aborted in the last moments after TSA refused to give the airline the go-ahead. At the time, TSA said there were credible threats to civil aviation in East Africa that were too significant to permit direct flights.

Kamau spoke yesterday when Kenya Airports Authority received security equipment from the US Government. The US gave as a grant to KAA 20 Desktop Explosive Trace Detectors (ETDs) valued at Sh61.4 million that are expected to significantly increase the level of security at JKIA and other airports in the country, especially those handling international visitors.

The ETDs can test for at least 13 traces of conventional explosives that may be hidden on passengers and in luggage and carry-on bags, while the consumables consist of disposable pads that are swabbed over items to collect samples from passengers and their luggage.

While officially handing over the machines to the Government, Isiah Parnell, Charge’ d’Affaires at the US Embassy in Nairobi, called for continued co-operation between Kenya and the US in a bid to fight global crime. Kamau said the departure section of Terminal 1A (previously Unit 4) will come into partial operation later this month after running a series of tests. The arrivals section is expected to be operational by February next year.

The commissioning of the terminal, with a passenger capacity of 2.5 million per year, has been delayed as it was expected to come into partial operation towards end of last year, and fully operational in the course of this year. The construction of the terminal was supposed to be fast-tracked to help in the handling of passengers after the International Arrivals Terminal was gutted by a fire last August. 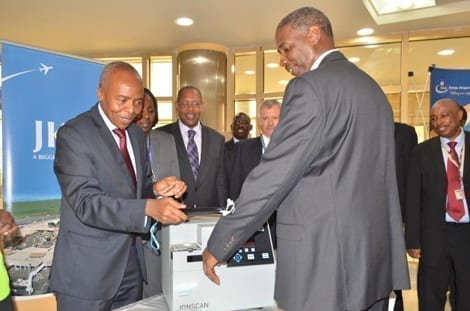