KILIFI COUNTY: ODM leaders from Kilifi and Kwale counties opposed to CORD’s call for a referendum and party leader Raila Odinga have run into hostile territory staged by local Members of the County Assembly and religious leaders.

In Kwale, pro-Raila and CORD MCAs have isolated pro-Jubilee leaders, especially Kwale Woman Representative Zainab Chidzuga, who are seen to be hobnobbing with the ruling coalition.

Many MCAs and religious leaders are allied to Raila, who is planning to tour Kwale to stem the rebellion in ODM, while others are simply exploiting the growing unpopularity of some the sitting MPs to upstage them at the next polls.

Some MCAs from Kwale recently met Raila or his emissaries to plan his tour of Kwale in two weeks, apparently to plot action against the rebels from Kwale.

Tiwi MCA Omar Mwakwambambirizwa and his Bongwe/Bobato counterpart Omar Boga, who is the deputy majority leader in the Kwale County Assembly, have effectively taken over management of ODM in conjunction with Chidzuga’s rival Fatuma Masito.

The immediate cause of the animosity is the recent visit to State House and apparent support of the local branch of the Council of Imams and Preachers of Kenya.

Last week, all ODM MCAs boycotted a meeting called by Chidzuga at her Kwale home prompting her to launch a tirade against Raila.

In Kilifi, the removal of Kilifi North MP Gideon Mung’aro has opened a new front of agitation against the former prime minister with reports that his sacking as CORD’s deputy chief whip caused confusion among CORD supporters and also spurred support for the MP, according to Kilifi Senator Stewart Madzayo.

Mung’aro claims those MPs who criticised him at a rally attended by Ruto on Saturday are nominated and should not be considered popular but The Standard established that at least one of the MCAs is elected.

“There are 35 elected MCAs in Kilifi County. Ask yourself why it was a nominated MCA who was given a chance to speak after we had spoken?” said Munga’ro Sunday when asked about the rift between MPs and MCAs.

In both areas local ODM leaders and their allies in Jubilee are split between support for Raila and Deputy President William Ruto who was hosted by rebel ODM MPs in Kilifi Sunday although Kilifi Governor Amason Kingi also attended the meeting and accused the rebels of inciting rebellion against the referendum without good reasons.

On Saturday, sharp differences between Kilifi MCAs and MPs Mung’aro and Mustafa Idi (Kilifi South) played out in front of Ruto when the ward representatives declared support for the referendum as the MPs opposed it. One MCA, Anderson Kingi told Ruto that “these MPs are misleading you because we shall vote for the referendum”.

Kibarani MCA Gatrod  Mbeyu Mwonga said the MCAs in Kilifi eventually boycotted a dinner sponsored by the deputy president, adding that they are unhappy with MPs because they do not regard them as leaders.

He said most MCAs have not decided how they will vote at the proposed referendum but support allocation of more money to county governments by any means, including without a referendum. He claimed that they felt belittled at the Ruto rally until they were accommodated by Kingi to speak “after all MPs had spoken” but denied that the governor was not behind MCAs’ attack on MPs.

Hassan Mwakimako, a lecturer at Pwani University in Kilifi, said yesterday that the differences were due to the scramble for Jubilee goodies.

“Jubilee has dangled a carrot that everyone is fighting for. MCAs feel that MPs are getting more than them,” Dr Mwakimako.

He said that ODM is trying to regroup in the region and some MCAs may be groomed to take on MPs in future polls.

Madzayo said that Mung’aro’s demotion had jolted CORD’s support in the area.

Mung’aro’s troubles begun when he spearheaded opposition to the referendum.

“There is no business for CORD to call a referendum with an aim to give more powers and resources to the counties. We have planned to do door-to-door campaigns to advise the people to reject it,” said Mungaro.

Jumwa claimed Jubilee had demonstrated good intention in solving the land problems at the Coast. 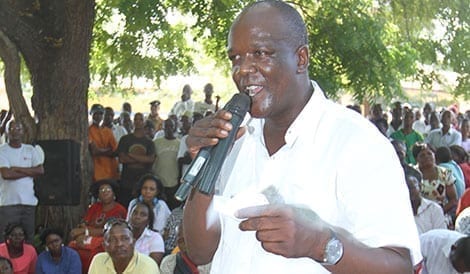