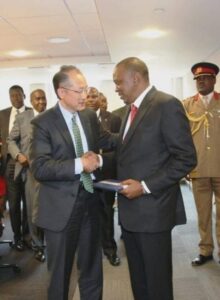 “The message we have for you is that you are not a small fish but a big one. The respect you (President Uhuru Kenyatta) have among your regional counterparts is also a plus and economic success in Kenya is very personal for me,” said Mr Kim.

Mr Kim said the World Bank is encouraged by the economic reforms going on in Kenya and they would be happy to support the country achieve its goals.

He spoke when he held a meeting with President Kenyatta at the bank’s headquarters in Washington, D.C. on Thursday .

“We will continue to engage with you and help you accomplish your development goals. We will bring the best experience from around the world to support sectors like real estate,” said the World Bank boss.

President Kenyatta said there was no doubt about Kenya’s economic strength and potential and all it needed was willing partners.

“Our ability to deliver our development goals as a country is not in doubt, and we can achieve this objective much sooner if we work together,” he said.

The President outlined several areas in which the World Bank can partner with Kenya as the country continues with its economic transformation.

He said increasing access to basic health care was one of the areas that Kenya expects the support of the World Bank.

The Head of State said Kenya was willing to work closely with the World Bank in increasing power generation, infrastructure development and fostering devolution.

“Housing is a major headache for Kenyans. Mortgages are unaffordable for so many and this is one area where the World Bank can provide support to enable Kenyans own houses,” he said.

President Kenyatta said the World Bank and Kenya stopped working closely on budgetary issues in the past because of structural problems with governance.

“We parted ways because of our troubled public financial management in the last. But now we have made and continue making changes to address this issues,” he said.

President Kenyatta said Kenya needs support of the World Bank to grow to the level of new economic giants such as the BRICS grouping.

“Be our linkage because we want to participate and grow to their levels,” he said.

Mr Kim said he was encouraged by devolution in Kenya and the World Bank was ready to support Kenya in succeeding with the new system of governance.

“Your leadership in regional integration is admirable,” he said.
The President was accompanied by five Cabinet Secretaries at the the meeting.