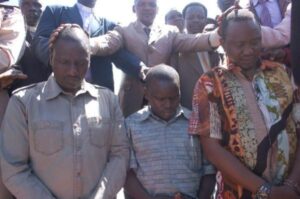 A witness who recanted his statement at the ICC had received a total of Sh1,010,571 from the court before deciding to change his testimony.

The witness who has confessed making up his testimony against Deputy President William Ruto and journalist Joshua Sang had received Sh460,000 from the prosecution alone between December 2013 and April 2014.

The money was for his “accommodation and daily spending”, according to prosecution documents made public by Ruto’s lawyer Essa Faal during cross-examination.

Faal led the witness to confess having been “astonished” by the amount of facilitation he was receiving from the prosecution.

The witness also said that the money was far beyond what he could make in a period of two years motivating him to make up evidence against Ruto.

He also said that he was not required to account, through receipts, for the money that was received from the prosecution.

When his testimony started, the witness told the court that his “natural hate” for Ruto and monetary benefits promised by the prosecution led him to falsifying his statement.

The witness has since recanted the testimony and also confessed faking entries made in his diary.

Monday, the witness also told the court that the prosecution’s investigators had told him that they were ready to support him in any way and with any proposal he made.