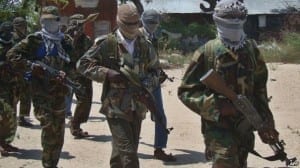 A US official however said “a senior al-Shabaab operative” had been targeted.

The Al-Qaeda-linked group lost control of Mogadishu to an African Union (AU) force in 2011 although it still holds many southern and central areas.

Pentagon spokesman John F Kirby said in a statement, that “We are assessing the results of the operation and will provide additional information as and when appropriate.”

The American action comes after Al-Shabaab rebels attacked a detention centre in Mogadishu on Sunday. This was in an apparent effort to free other militants detained there.

“All of the attackers, as well as three government soldiers and two civilians, were killed,” Somali officials said

The 22,000-member AU force that drove Al-Shabaab from their former strongholds in the capital and other urban centers, have been supported by the Pentagon and the US state department.

The militants continue to carry out bombings and assassinations in the city.

Al-Shabaab which said that it carried out 2013’s attack on the Westgate mall in the Kenyan capital, Nairobi, in which at least 67 people were killed, wants to overthrow the internationally supported Somali government and frequently attack government

targets as well as neighboring countries that provide troops to the AU force.