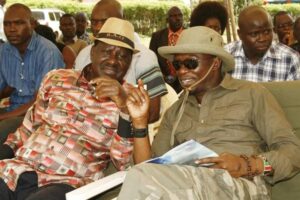 President Uhuru Kenyatta will on Sunday continue his onslaught on Opposition leader Raila Odinga’s strongholds when he visits Budalang’i constituency to commission the construction of a bridge across River Nzoia where nine people drowned last week.

The President is scheduled to attend a church function in Kericho before heading to Busia County and spend the night in Kakamega.

On Monday, the President will head to Migori County where he will be hosted by Governor Okoth Obado and Rongo MP Dalmas Otieno, both of whom are at loggerheads with Mr Odinga and are seen as amiable to Jubilee.

The leaders will be launching an anti-malaria campaign.

The President’s Budalang’i visit comes hot on the heels of Mr Odinga’s visit on Saturday to the constituency represented by Mr Ababu Namwamba.

The former Prime Minister, who was in Busia to launch the collection of signatures for the referendum, also attended the burial of the mother of former Cabinet minister Fred Gumo.

However, of significance is the fact that President Kenyatta will be hosted by Mr Namwamba, who has expressed discomfort in Mr Odinga’s Orange Democratic Movement following the aborted party elections in February.

It is against this backdrop that the President’s visit is seen as an effort to seduce him as part of the Jubilee Coalition’s strategy to weaken Mr Odinga’s support base.

The transformation of Martha Karua and Ababu Namwamba

Speaking in Budalang’i on Saturday, Mr Odinga said he had no problem with Mr Namwamba.

“My brother Ababu is in ODM to stay and, in case of any problem, we can solve as party members without a third party,” he said.

Mr Odinga noted that they are ready to work together to ensure the push for referendum succeeds.

Mr Namwamba used the occasion to “set the record straight” that President Kenyatta’s visit had nothing to do with his perceived closeness to the ruling coalition.

“The President is coming because of the issue of the River Nzoia tragedy that we want to solve,” he told mourners.

Mr Namwamba said he had written to the national government about the tragedy that is the River Nzoia crossings.

“When I heard the news of the tragedy, I wrote a letter to the President asking him when the people of Budalang’i will be safe when crossing the river,” he said.

He also rallied support for the Cord referendum campaign, displaying books, which he said he will use to collect signatures.

“My constituency office will be the place for people who want to give their signatures to find the book. We want to ensure we collect enough signatures to enable us carry out the referendum,” he said.

Last month, the MP railed at the party leadership for failing to call for elections and trying to impose leaders on members.

The former Prime Minister said that the country needs a referendum to provide solutions to key matters like runaway insecurity, corruption and tribalism.

He said they wanted to amend the Constitution to enable counties get more money to initiate development projects in their regions.

“Since we have more functions that are devolved, we want the counties to get more money so that governors can do their work,” he said.

Meanwhile, TNA secretary-general Onyango Oloo on Saturday disclosed to the Sunday Nationthat the Jubilee coalition had come up with an elaborate strategy to raid ODM strongholds with the aim of forestalling the referendum.

“We have hatched a plan together with officials of TNA from Vihiga, Kakamega, Migori, Kisumu, Kisii, Nyamira, Siaya and Homa Bay to rally more support towards fighting enemies of the government’s progress. The plan includes rallying MCAs and MPs to understand that the referendum is unnecessary,” said Mr Oloo.

On Saturday, Mr Odinga said that through a referendum, the Independent Electoral and Boundaries Commission (IEBC) will be reformed to ensure all eligible voters are enlisted.

And later in Siaya County, Mr Odinga asked members of county assemblies to shun “corrupt” rewards meant to sway them from supporting the coalition’s referendum push.

The government has proposed a Sh12 billion deal for offices and car grants for MCAs, a move Mr Odinga dismissed as bribery.

“Please do not allow the government to bribe you by giving you taxpayers’ money. Let us join hands and bring more funds to the wards,” said Mr Odinga at the funeral of former Bondo MP Jonah Ougo.

The former PM once again turned down President Kenyatta’s offer for dialogue, saying it had come too late.

“Why should they cry now yet they had room for talks and rubbished us on grounds that we are desperate for power and that we never had an agenda for the country?” asked Mr Odinga.

The Jubilee Government has been criticised for sidelining opposition strongholds in public job appointments.

This is the second time the Jubilee leader will be visiting Migori County since his election as President. He first visited Rongo constituency during the burial of the daughter of Dalmas, who is viewed as a rebel in ODM.

Some of the issues Mr Kenyatta will be confronted with include delayed payment of cane farmers contracted by Sony Sugar Company whose arrears stand at Sh540 million.

“We are going to abandon cane farming altogether if the national government is not keen to bail out the ailing millers in Western Kenya,” said Kenya Sugarcane Farmers Growers Union national chairman Ezra Okoth.

The firm’s managing director, Mrs Jane Pamela Odhiambo, said part of the debt was loans given to the Awendo–based miller for expansion in the 1990s.

Cases of poor leaf payments in the tobacco industry will also feature beside improvement of infrastructure such as tarmacking of roads.

Already 60 members of the Migori County assembly have welcomed President Kenyatta to visit their region.

“We welcome Mr Kenyatta to Migori County to interact with us. We will engage him as leaders to discuss the welfare of our people,” said the assembly Speaker Gordon Ogolla who was flanked by the MCAs. 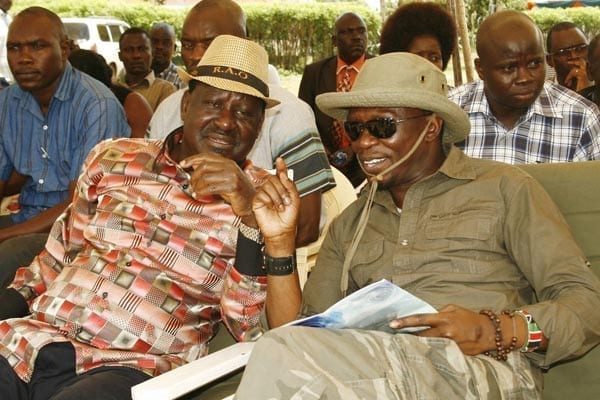