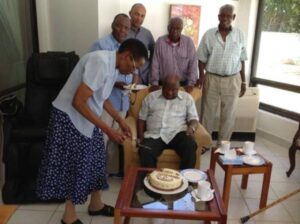 Peter Kenneth visited Matiba on the day, terming the time spent with him a reminder of the effects of Kenya’s troublesome political past.

“Today, I had the honour of spending some time with Hon. and Mrs. Kenneth. S.N. Matiba in Diani, Mombasa. A stark reminder of our dark political past and what it did to one of Kenya’s most illustrious sons,” Kenneth posted on his Facebook page.

Due to his political activism, Matiba was held at Kamiti Maximum Security Prison without trial during Moi’s time as president.

He was denied medical attention and suffered a stroke as a result.

You were ill-advised on govenor bid against Sonko, Isaac…

Peter Kenneth and Kabogo attends the launch of Kenya…

Kenneth quits Jubilee to run against Sonko, Kidero as…