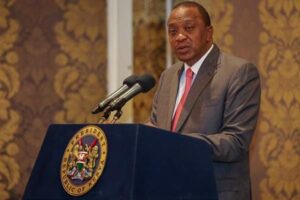 President Uhuru Kenyatta on Monday accused the United Nations Security Council of being “undemocratic” and said the body must be reformed to make Africa’s voice heard.

President Kenyatta said reforms are inevitable if the institution is to be representative of the continent’s shared values.

He said within the United Nations, the Security Council — the principal organ responsible for maintaining international peace and security — best exemplifies a structure that is not compatible with the current realities of the world.

“It does not reflect the current world power distribution and geopolitical situation. The Council’s small size and exclusive nature, its relations with the General Assembly, its working methods and undemocratic nature, have become out of step with today’s demands,” the President said.

“Let us recognise, from now on — in each capital in our continent, in every nation — that our interest as a region is our national interest. Africa must have a voice in the UN Security Council,” he added.

President Kenyatta spoke in Nairobi when he opened the African Union Committee of Ten (C-10) on the United Nations Security Council Reform.

THOSE WORKING AGAINST KENYA’S INTERESTS WILL NOT…

He said the UN Security Council is antiquated and ill-adapted to fulfill its tasks, adding that some regions of the world do not have representation on the Council.

“Indeed, a considerable portion of the UN’s global constituency is unrepresented and unheard in the administration of global affairs,” he said.

He said a region like Africa, which provides a large share of the UN’s security agenda, has no voice in the Council.

He said it is not only discriminatory but unfair and unjust, adding that the institution must be refocused towards the realisation of its founding objectives.

“Very often, the world has witnessed the over-represented members bargaining and haggling over their narrow national interests at the expense of the institution’s mandate, even in the midst of global humanitarian crises,” he said.

He said the structural and normative issues obstruct the achievement of the United Nations founding objectives, and frustrates the advancement of its agenda to bring justice, sovereign equality, democracy and the protection of human rights to its neediest constituencies.

The President stressed that the world needs to remember that the collective values as humanity are supposed to be enshrined in the UN’s supranational charter, and that these values need to be demonstrated and pursued collectively and consistently throughout the globe.

President Kenyatta said the inequality and lack of democracy in representation has also led to inconsistencies, inefficiency and the marginalisation of the world’s vulnerable communities, severely betraying it’s largest constituency — the less developed countries.

“A good instance of this betrayal and marginalisation is the Africanisation of tragedy. Conflict, disease, famine and natural disaster are constantly profiled as African, normal and undeserving serious global attention.

“This sustains the narrative of inequality between the peoples of the world, and the socioeconomic and political apartheid that sees the so – called Third World casually relegated to the periphery of global affairs,” he said.

The President cited the 1994 Rwanda genocide and the recent Ebola outbreak in West Africa as evidence of lacklustre global response to African issues.

“We want a UN that is capable of securing world peace in a time of unique and unprecedented security challenges. Most importantly, we want a conversation that is premised on the principle of equality and in an environment that allows every voice and view to be is heard,” the President said.

He said the UN should be the last institution on earth propagating the idea that some societies are inherently superior, or that some people are generally unworthy.

The President urged Ministers of the C-10 to redouble their efforts to ensure Africa secures a strategic position in the UN.

Foreign Affairs Cabinet Secretary Amina Mohamed said the African Union Committee on UN Security Council reforms will continue with its efforts by engaging other regions of the world on the issue.

She expressed optimism that the committee’s efforts will create sufficient momentum for change in the United Nations Security Council.

Sierra Leone Foreign Minister Samura Kamara said the current meeting is taking place at a crucial time when Africa is required to unite in purpose and action to increase its voice and participation at the highest decision-making levels in global governance.

Dr Aisha Laraba Abdullahi, the commissioner for political affairs and representative of the African Union Commission, said the misrepresentation of Africa at the UN Security Council undermines the principal of inclusivity.