As a poor village boy in western Kenya, Erick Komolo walked 10 kilometres a day to and from primary school.

By the end of his final term, his toenails were so worn down from the daily trek that they have never grown back, he says.

But it was all worthwhile. “I’m better-off by far than anyone else in my village,” he says, referring not to financial gain but to opportunities for a decent education.

Komolo has travelled a long way from those dusty paths in his rural homeland. Now in his fourth year of doctoral studies at University of Hong Kong (HKU), researching international trade law, the 31-year-old has experienced first-hand how education has the power to transform lives.

Not content to be the exception, Komolo has mustered his limited resources and connections to establish a trust that will give other underprivileged Kenyan children the same chance to escape poverty.

“In my village, there’s no running water, no permanent housing,” he says. “Most homes still use paraffin lamps and cook with firewood.

“Before, we used grass to build our huts, but now there’s no grass due to climate change, so we use mud, cow dung and metal sheets.”

The vicious circle of poverty, and lack of education, have been the downfall of many of Komolo’s former primary school classmates, he says.

“I had three close friends who were very bright, but they dropped out after primary school because they couldn’t afford the school fees.”

They married at a young age, became infected with HIV, and died of Aids in their late 20s.

“That’s not unusual,” Komolo says with a sigh, adding that about 80 per cent of his former schoolmates have lost one or both parents to the disease. “There’s nothing much to do in the village, so most people have complicated sex lives.”

Komolo, who decided to pursue his PhD in Hong Kong in 2011, thanks his father, a retired primary school teacher, for insisting that his 15 children go to school regardless of the family’s circumstances.

Komolo’s mother, who never went to school and wed at the age of 16, was also an inspiration.

“As a child, I used to read to her simple story books in English and our native Luo dialect, then she would struggle to read herself, too. She had a burning desire for knowledge and would encourage you, [saying] that everything is possible.

“It was my mum who, when I was about 10 years old, told me she believed I could make it to university. That stuck with me and I ended up being the first person in our village to get into university.”

With hindsight, Komolo believes his mother could have been a professor if she’d been able to go to school. “You can tell she remains intellectually very curious,” he says. 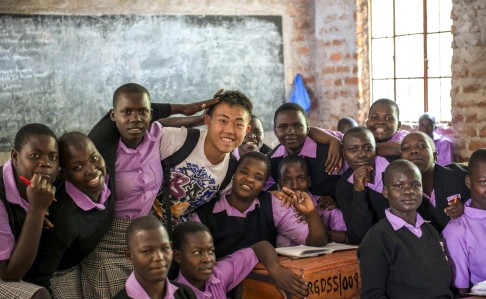 Jerome Poon from HKU with students at a girls’ school in Kenya. Photo: Jerome Poon

Komolo’s dedication to studying paid off when he came top of his class and was admitted to a respected boarding school 60 kilometres from his village, where he awoke at 4am every day to study.

Given his family’s financial situation, he knew he had to pass his exams with distinction if he were to receive a government scholarship for further studies.

Komolo says fewer than 2 per cent of students in Kenya enter university. “It’s even more difficult to get a government subsidy and loan for university. You simply have to be the top of your class.”

His dedication paid off again when he passed his public exams with flying colours and was accepted by the School of Law at Moi University, one of the seven top Kenyan tertiary institutions.

The government was unable to fund his studies, however, so Komolo took a gap year and taught maths and geography in a secondary school, earning a monthly salary of 4,000 Kenyan shillings (HK$400).

In his fourth and final year at Moi, Komolo was appointed president of the students’ union, which organised protests against the government’s education policies.

“It was not unlike the Hong Kong student leaders in the Umbrella Movement,” he says, smiling.

After graduating, Komolo received a USAid scholarship to work in the Kenyan parliament as a research assistant for a year. While helping with the implementation of new legislation, he also completed his law exams and became a qualified lawyer.

Another scholarship followed, allowing him to spend a year at the University of Kent in southern England, where he earned a master’s degree in law. Returning to Kenya, he became a barrister in the capital, Nairobi, specialising in human rights.

One of his most memorable cases was the Federation of Women Lawyers versus the president of Kenya, he says.

“We challenged the president’s decision to appoint fewer female judges to Kenya’s Supreme Court. That case eventually led to an increase in the number of women judges in Kenya. That’s important for a country where women are gravely marginalised.”

A year later, Komolo was again gripped by the urge to tackle a new challenge. “I was attracted to Asia, and Hong Kong in particular. I don’t know why but there was something refreshing about it. I went to cybercafes in Nairobi and spent hours on Google. That’s how I ended up applying to HKU. I’m glad I got a professor with similar research interests,” he says.

Not long after arriving in the city, Komolo established the Uwezo PamojaTrust, Swahili for “together we can do it”, with a small group of friends who share his beliefs in social justice and giving back.

For two years, the charity has taken about 20 students from four local universities on a summer trip to Komolo’s home village in Homa Bay. There, the youngsters help with teaching duties at village schools and building classrooms. Groups also visit neighbouring countries Uganda and Rwanda.

The students don’t have much, and that motivated me to work hard
ERICK KOMOLO

Komolo says his role is the link. “I take Hong Kong students to where I know best, where I can guarantee security and monitor the impact, and I can tell you my villagers feel very proud about this. Such cross-cultural interactions tend to boost self-esteem, especially among children,” he says.

Jerome Poon Chi-wang, a second-year medical student at HKU who joined the trip last summer, describes the experience as “fruitful and memorable”.

“I felt very touched by what I saw,” Poon, 22, says. “Students there lack resources but are extremely keen to learn. It’s rare to see such a desire to learn in Hong Kong.”

He admired the villagers’ vitality. Despite their hardships – some pregnant and living with HIV – he saw lively, smiling faces.

“I learned how to be contented and to let certain things go,” he says. “The students don’t have much, and that motivated me to work hard so I will have the ability to help them more in the future.”

The trust also sponsors promising students in the village. Since it is registered in Kenya, its funds come from partner organisation Volunteer Space (Hong Kong).

The children are chosen after visits to schools and homes, before a final selection by local village committees comprising teachers and elders.

Youngsters’ financial needs and aspirations for education are the trust’s guiding principles. Komolo says they want to establish a greater network of schools to ensure no child misses the opportunity. Judy Kung helped out at another school in Kenya.

“We are currently supporting 20 kids – most of them orphans – paying their tuition fees of about HK$2,500 a year. We also plan to buy them school uniforms and books,” Komolo says.

He hopes the trust can support 100 students by the end of 2015. Komolo’s home village is his main motivation because of the special place it holds in his heart.

“There’s the sense that, despite all the difficulties in what we do, there’s always a bigger picture. To take the academic path requires a lot of personal commitment.

“I want to set an example for children in the village; I want to show them that it is possible. I want to say: ‘See, I can do it and so can you.'”

There is little productivity in his village, he says, which he blames on poor government policies and climate change. The land has been subdivided too much for families to grow sufficient crops.

Unpredictable weather exacerbates the problem, and most villagers survive by relying on their offspring to send money home from the cities.

Pondering the next stage of his life after HKU, Komolo sees himself returning home to teach at a university. While he’s at it, another plan is to set up a social enterprise to foster village homestays for cultural and backpacking tourists.

“The idea is to ‘devolve’ tourism to the villages instead of the traditional safaris that Kenya is known for. It would be mutually beneficial. Tourists would pay less than the price of a hotel and be able to experience how locals live. Meanwhile, villagers would benefit from the tourism industry,” he says.

“I love Hong Kong: its security and infrastructure, and I love the people. I have made great friends here and have even inspired some to focus on Africa. One of my Hong Kong friends is about to start a PhD at HKU looking at education policies and practice in my village. He’ll be living in my village hut throughout his research.

“But I don’t think Hong Kong needs me. Kenya needs me to come here, make links, and use my links to change Kenya.”

His ultimate dream, he reveals, “is to be Kenya’s minister of trade”.

The Uwezo Pamoja Trust is recruiting volunteers to travel to Kenya in June to build a classroom and science lab for a girls’ school in the village. Inquiries about education sponsorship for children in Kenya can be sent to Volunteer Space (Hong Kong) at [email protected]

Video:Obama To Push For Immigration Reforms This Month

Video:Pastor connered for Affairs With Man’s First And Second Wives