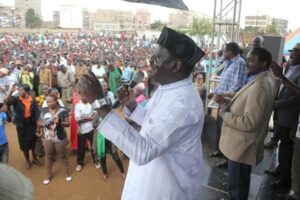 Both initiatives seek to amend the Constitution.

Present at the meeting which took place at the Silver Springs Hotel in Hurlingham included Siaya Senator James Orengo and his Machakos counterpart Johnstone Muthama.

Sources close to the two leaders told Nation that the deliberations centred on Cord’s push for the Okoa Kenya referendum.

“The talks were mainly about the forthcoming referendum. They discussed the possibility of merging the Okoa Kenya and Pesa Mashinani campaigns,” said our source who sought anonymity because of the secret nature of the meeting.

Incidentally, the chairman of the Okoa Kenya team of experts which crafted the referendum Bill Paul Mwangi was also seen within the hotel.
Contacted, Mr Mwangi confirmed that he indeed was at the hotel but said the meeting was “purely coincidental.”

“It was purely coincidental. I was there to attend to my own business,” he stated.

Contacted, Mr Ruto confirmed having a tea session with Mr Odinga and the two senators but insisted that they did not discuss the two initiatives.

“It was just tea and I can tell you that the tea was not political,” he said on phone indicating that he had been at the hotel to meet lawyers driving the Pesa Mashinani initiative.

But our sources revealed that Mr Ruto wanted to know the progress of the Okoa Kenya campaign before making any commitments regarding the possibility of merging it with the Pesa Mashinani one spearheaded by the Council of Governors, which he chairs.

The meeting between Mr Odinga and Mr Ruto is likely to raise temperatures in the country’s political scene, coming only days after the latter warned President Kenyatta and Deputy President William Ruto that South Rift is not a JAP zone.