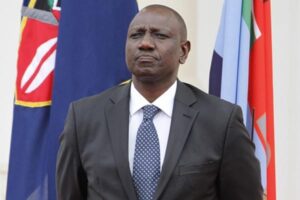 Eldoret, Kenya – Uasin Gishu County residents demonstrated along the streets of Eldoret on Tuesday protesting against corruption allegations directed to the Deputy President William Ruto involving construction of a mega referral hospital in the area.

The residents displayed placards showing support to the DP and the construction of the new modern health facility estimated at Sh28 billion, saying the hospital is a huge boost to the country’s health sector and should not be politicized.

According to the demonstrators, the Coalition for Reforms and Democracy ( CORD) led by Raila Odinga is fanning cheap propaganda that the DP had swindled money for renovation of the Moi Teaching and Referral Hospital (MTRH).

“The Deputy President has shown great leadership and the proposal to construct the modern facility is one of his attributes, he stopped the exorbitant tender to renovate MTRH at Sh17 billion struck during the grand coalition government and that’s why the opposition are angry,” said Andrew Lagat Samir, one of the protestors.

“This will be the largest hospital in the country and will ease pressure on MTRH that is currently congested with numerous referrals from Rift Valley, any right thinking citizen should support such a noble project,” added Lagat.

Peter Wanyoike wondered why corruption allegations were emanating from the Opposition yet they were in power and approved the usage of Sh17 billion for the renovation of MTRH, an expenditure which raises many questions.

Simon Kiprotich from Kesses said they are in full support of the construction of a new facility that will be erected on a 200 acre piece of land in Kiplombe area, saying MTRH has been overstretched beyond limit and can longer handle numerous referral cases across Rift Valley and Western Kenya effectively.

ICC Witness denies he was coached

“Every 30 minutes, ambulance sirens fill the air of Eldoret town signifying the high number of referral cases directed to MTRH, they come from as far as Western, Nyanza and Uganda and this shows the urgent need of a new and bigger facility,” he said.

Samuel Samoei another resident dismissed allegations by Herbert Ojwang, a former aide of Raila that the DP had swindled money for the project, saying the latter had instead cancelled an inflated tender to renovate MTRH and in its place build a new modern hospital.

“The proposed hospital will benefit us all as Kenyans, our children will be employed and health access will be enhanced, how can they say that Ruto has stolen the money yet no tender has been approved,” Samoei observed.

The protest comes a few days after Ojwang linked Ruto to the alleged scam, on the basis that he was using his influence to coordinate a deal for upgrading MTRH at a cost of Sh17 billion which was taken from him and a new facility proposed, raising the expenditure to Sh28 billion.