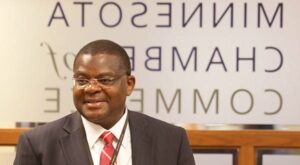 Kenya’s ambassador on Monday asked Minnesota business leaders to sharpen their focus on East Africa, a region ripe for infrastructure and other investments as its political and commercial climates stabilize.

As in other rising countries around the world, a fast-growing middle class has increased the cash flowing through the Kenya economy and boosted demand in the country for higher-quality products and services – major draws for businesses and investors from more established economies.

“Kenya is ready for takeoff,” Githae told about two dozen business leaders at a breakfast discussion hosted by the Minnesota Chamber of Commerce. “The investment opportunities are huge and I would like the business people from this great state to think about how you can invest in this country.”

A push for a bigger U.S. buy-in comes about a half-decade after Kenya drafted a more liberal constitution that, in part, makes it more commercially accessible and inclusive for domestic players and those abroad. In addition, an anti-corruption campaign has weeded out dozens of problematic officials.

The moves, along with fresh oil and gas discoveries and a huge appetite for public-private partnerships, helped buoy stateside interest in Kenya. Nationwide, exports to the country skyrocketed to $1.6 billion in 2015, more than doubling the previous year’s figure, according to national data.

Minnesota followed suit, swelling its exports to Kenya by nearly 40 percent, to $2.6 million, during the same span, according to the Minnesota Trade Office.

“International trade is really more important than I think most Minnesotans realize,” Minnesota Chamber of Commerce President Bill Blazar said. “If you want to get ahead of the game, then you ought to be thinking about investing in Africa.”

Kenyan President Uhuru Kenyatta has spearheaded an expansion of the airport in Nairobi, the country’s main entry point, including plans for direct flights to the U.S. to boost tourism and make business partnerships more attractive.

China, Japan and South Korea are among the countries with more firm toeholds in Kenya than the U.S., having agreed to support major infrastructure and other projects.

Still, Githae said the U.S. is well-positioned to tighten its grip. That includes Minnesota, where a substantial African immigrant population provides a platform for closer ties with the region.

The U.S. is especially well-suited to a Kenyan economy and government regime emphasizing private investment over government-linked plays. In addition, Githae said, the U.S. generally has streamlined systems for making and approving business decisions and the technology to support overseas activity.

“You have so much on your side,” he said. “You need to leverage the competitive advantage you have.”

Kenya’s central challenge in attracting overseas businesses and partners is turmoil in its home region, which for decades has been a hotbed of political unrest and, especially recently, terrorism. Turbulence in Somalia has sometimes spilled across the border into Kenya.

But the country is finding ways to insulate itself, including by boosting its economy.

“You can choose your friends but you can’t choose your neighbors,” Githae said, noting that Kenya is making headway in its ongoing struggle to combat terrorism.

President Obama is set to visit Kenya in July for the 2015 Global Entrepreneurship Summit, an event jointly hosted by the Kenyan government aimed at connecting entrepreneurs with business and government officials from around the world interested in supporting them. It’s the first time the annual event will be held in sub-Saharan Africa.

The Obama administration has touted the trip as a way to solidify its relations with sub-Saharan countries, including Kenya, and support economic growth in the region.
–finance-commerce.com