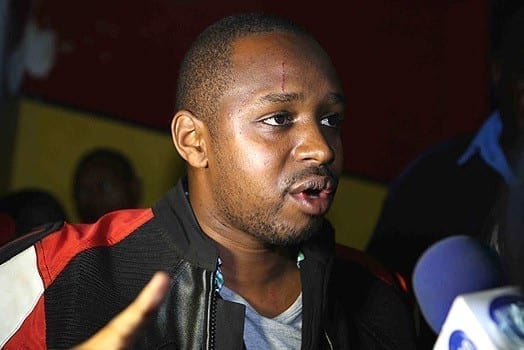 Political activist Boniface Mwangi has laid bare his wife’s nasty encounter with a quack doctor which nearly ended her life in 2009.

In a lengthy post on Facebook, the activist narrated how a gynecologist at a city clinic recommended that his wife’s womb be evacuated while she was carrying a four-month-old foetus.

“She was four months pregnant at the time and the scan revealed that the baby’s heart rate was faint,” wrote Mwangi.

“The medical Centre obstetrician/gynaecologist (name withheld), gave my wife the choice of an evacuation or another scan at a hospital of her choice.”

She chose MP Shah who, after a scan, confirmed that indeed she required an evacuation. An evacuation of the uterus is a procedure where the cervix neck of the womb is opened up and the womb is emptied, explained Mwangi.

So she went back to the first doctor who conducted the evacuation.

A few days later as Mwangi was busy working, his wife collapsed while at home alone and it took quick intervention of a neighbor who rushed her to Nairobi Hospital.

“One of the clots that came forth was actually the foetus. Another gynaecologist, Dr. Gachiri, examined my wife and recommended a second evacuation. She was taken to theatre and it was done,” recalls Mwangi.

Later, Boniface went to the first gynecologist to seek answers about what went wrong but this is what he was told; “He told us there was nowhere we could take him. That l should count myself lucky since my wife was alive and in his own words, ‘We take women to theatre and they die, that’s why hospitals have mortuaries’.”

More people have since narrated their experiences, some shocking and others horrifying to say the least.

Rachel Deuces posted “Am lost for words! The same doctor who told me that my tubes had blocked and my only option was to undergo a surgery at MP Shah that could cost me approx 350,000/=….. Three months later I conceived….shame on him!”

Mercy Karegi went on, “I’m yet to see anyone who wins a case against any doctor and the I can I sue my doctor who took me to theatre twice in a week. The first time for an evacuation because the foetus was not responding and after a week a ruptured ectopic pregnancy were I lost one of the fallopian tubes. I even asked the doctor how many pregnancies I had because surely what had he evacuated and after 7 days I was diagnosed with a ruptured ectopic pregnancy. This was done by a prof. not just a gynecologist in one of the best hospitals in Nairobi. Thank God am alive today.”

“ I gave birth to my first born son normally and I was discharged the following day only to be taken back for an emergency c_ section I was told I had retained placenta God knows I would have died from the pain and bleeding after my second discharge I confronted the doctor who shamelessly told me in his own words this things do happen….my son just turn two years he’s healthy am okey but above all from the bottom of my heart I have forgiven him,” Benzy Whens continued.

Winnie Mairura posted, “Did a scan at Medical imaging plaza upperhill since my due date had elapsed, they told me my baby was fine i should not worry only to be rushed to Nairobi hospital for an emergency cs,almost lost my baby. These clinics wachana nazo.”

“Kenyan” Arrested Over Murder of US Woman in Qatar

A must read:“See how the Good Lord works! If it’s meant to be, it will be.”