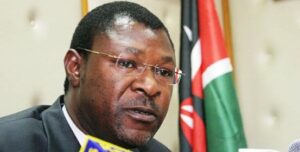 The country’s political terrain is facing a major shake-up with a confidential dossier revealing a plan to arrest and charge Ford Kenya leader Moses Wetang’ula with several electoral offences.

The dossier, secretly submitted to Director of Public Prosecutions Keriako Tobiko, surfaced just a day after Wetang’ula announced the grand plan by his Coalition for Reforms and Democracy ( CORD) to impeach President Uhuru Kenyatta for alleged constitutional violations.

The country’s top detectives at the Directorate of Criminal Investigations want Wetang’ula, the only CORD co-principal in Parliament who is also the Senate Minority Leader, arraigned in court and be charged for bribing and treating voters. With a fiercely independent Judiciary that has previously clashed with senators, Wetang’ula’s case in the Judiciary is likely to be fodder for heightened political contest outside the courts.

As per the Elections Act, if the courts find him guilty, it will be the final nail on his political career because convicts of electoral offences are not allowed to seek elective positions. The penalties upon conviction are a maximum fine of Sh1 million or a jail term of up to six years or both.

In their file to the DPP, the detectives have noted that they have “sufficient evidence” to charge Wetang’ula over thousands of shillings that he allegedly splashed on voters just days to the March 4, 2013 polls.

“Evidence so far availed is sufficient to hold Wetang’ula criminally responsible in respect of offences of bribery of voters and treating of voters contrary to Section 62 and 64 of the Elections Act respectively. Please get sight of a provisional charge sheet filed in sub-file G for ease of reference,” John Kariuki, for the DCI, wrote in the July 17, 2015 letter to the DCI.

Wetang’ula twice defeated Jubilee coalition’s Musikari Kombo, first in the General Election on March 4, 2013. His election was nullified, and when he went for a by-election in December he crushed the government campaign machinery backing Kombo to retain the Bungoma senatorial seat.

Mr Tobiko confirmed that he had received the letter on the CID inquiry file number 123/2013 on the voter bribery, and that he was studying it before taking action.

For a DPP who usually updates the public on crucial correspondence on on-going cases, the secrecy surrounding the details on the Wetang’ula case is a pointer to the explosive political ramifications of hauling the Opposition politician to court just two years to the next General Election – more so just days after he vowed to challenge President Kenyatta and his Jubilee government for the presidency in the next polls.

In the current national political dispensation, Wetang’ula is one of the three co-principals in CORD and the national party leader of Ford Kenya.

The timing of the dossier too, coming at a time when Opposition leaders have renewed their onslaught on the government over its handling of the teachers’ strike and the fight against corruption also raises questions.

The dossier before the DPP names places where bribery and treating of voters is alleged to have taken place including a meeting of Bishops and Pastors held at Nzoia Guest House on February 5, 2013; a meeting of religious leaders held at Red Cross offices in Kanduyi on February 21, 2013; and a meeting held at Misikhu market by an agent of Wetang’ula on March 3, 2013.

Other listed meetings include a campaign meeting held at the home of an agent of the senator on March 3, 2013; voter bribery by his agent at Mupeli polling station on March 4, 2013 and that Wetang’ula directly or indirectly through his agents conducted elections campaigns and meetings outside the stipulated campaign period at Misikhu market.

The CID investigations labeled CID/IB/SCU/4/4/1/VOL.XXXIII/117, states that those who witnessed the treating and bribery of voters and treating of voters by the Senator will be called as witnesses in the inquiry.

“Those who claim not to have witnessed the bribery and treating of voters can be called to testify by the defence if they so wish and will be cross-examined on the events of that day by the prosecutor,” the letter further states.

Bungoma County is an opposition stronghold and has been an attractive voting bloc for Jubilee politicians. Already, the government’s operatives on the ground have a standing agenda for a presidential visit to issue a charter to Kibabii University College, launch a roadmap for the revival of Pan Paper Mills and commission the construction of Musikoma, Lwakhakha – Malakisi roads that would open up the county to Uganda.

If the law works against Wetang’ula in the latest development, then the race for the CORD presidential flag bearer will stay open only to his co-principals, former Prime Minister (PM) Raila Odinga and former Vice-President (VP) and Wiper party leader Kalonzo Musyoka. Such a development could also have serious political bearing for the wider CORD fraternity as well as in Western region, where Wetang’ula seeks to affirm his position as the senior-most politician seeking the presidency in 2017.

In April this year, the Registrar of the Supreme Court Esther Nyayieka formally served the Office of the Director of Public Prosecutions (ODPP), the Speaker of the Senate and the Independent Electoral and Boundaries Commission (IEBC) with a report of the commission of the election offence of bribery.

This followed a Supreme Court decision on March 17, which affirmed that the Bungoma Senator and CORD co-principal had committed an electoral offence of bribing voters in the run-up to the March 4, 2013 election. The decision issued by Supreme Court judges Willy Mutunga (Chief Justice), Kalpana Rawal (Deputy Chief Justice), Philip Tunoi, Jackton Ojwang’ and Mohamed Ibrahim had then divided lawyers over the implication of the verdict on Wetang’ula’s political future.

In their decision, the Supreme Court judges had established that there was a basis for reframing the law to delimit the respective mandates of the election court and the ordinary criminal court on offences resulting from an electoral process.

Wetang’ula then came out strongly to deny that he could be locked out of the 2017 presidential elections owing to an earlier court case that reportedly found him culpable of bribing voters.