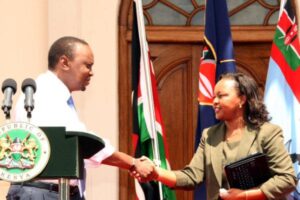 An MP has filed a complaint against Machakos Senator Johnstone Muthama over remarks including allegedly terming the Devolution CS the President’s lover.

Dagoretti South MP Dennis Waweru said Muthama made the claims during a rally at Uhuru Park on Wednesday, “despite knowing the President is happily married and a committed family man”.

In the list of Waweru’s complaints to the NCIC is also the reference to Uhuru as a “careless President preoccupied with his alleged clandestine lover, CS Anne Waiguru”.

“The Senator implied that Uhuru favours Waiguru more than other CSs and for reasons other than her professionalism and diligence,” Waweru said in a statement on Thursday.

The MP added that Muthama threatened that teachers who return to school as advised by Uhuru would be stoned.

He also reported that the Senator said Uhuru will be “smoked out of State House soon” if he does not resign.

Waweru said the Senator “ridiculed key state officers” and “impeached the whole of section 13 of the National Cohesion and Integration Act”.

VIDEO: Anne Waiguru reveals she was a Spoilt…

He noted that section 13 (1) (a) prohibits the use of “threatening, abusive or insulting words”, and similar behaviour.

Waweru added that Muthama “made a complete mockery” of moral and ethical standards governing leaders, and “scorned” the Public Officer Ethics Act.

“The list of laws Senator Muthama abused on live television through his utterances is endless,” Muthama said and demanded immediate action by security agencies.

“If no legal action is not taken we will hold a rally of all Jubilee supporters over the weekend at Uhuru Park and then march to his home to initiate citizen arrest.”

A Solidarity Account for donations towards teachers’ pay was unveiled during the charged Cord rally in Nairobi, at which Muthama spoke.

Cord leader Raila Odinga asked the public to send contributions, but Jubilee MPs have accused him of trying to obtain funds for other uses.

They claimed the account is linked to the Opposition leader’s private credit card, and that funds raised will be used by the coalition.

Knut did not pay Cord to support teachers – Sossion