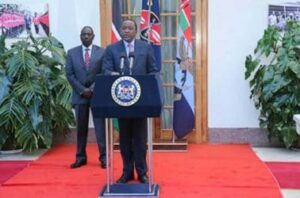 Malindi MP Dan Kazungu was appointed Cabinet Secretary Mining as Jacob Kaimenyi moved from Education to Lands and his docket taken by Fred Matiang’i who was moved from ministry of ICT.

The President has called  for fast tracking of vetting and approval of new cabinet nominees for cabinet to allow efficiency of public service.

He said the changes aim at enhancing service delivery in the public sector. He said more ministries would allow cabinet secretaries to focus better on their deliverables and drive the economic growth of the country.

The President also said he would announce the reorganisation of the executive office of the president within the next two weeks to further the government’s agenda to serve.

Fellow Kenyans, the promulgation of the Constitution on 27th August 2010 and the subsequent general elections held under that Constitution ushered in a new dispensation for our country and a new way of doing business. The Constitution of Kenya forms the new foundation upon which we are to build a more inclusive and cohesive Republic. A Republic in which people of all ethnicities, races and religions have an equal seat at the table and an equal voice on matters of the nation.

I am privileged to be the first President to oversee the full implementation of this Constitution. This, of course ,means that my Administration is also the first to be faced with the unique challenges posed by the new constitutional order, particularly as we set out to deliver on the promises that we made to the people of this Nation. The last two and a half years of this journey have been extremely fruitful but at the same time we have had our fair share of challenges.

Having savoured our successes and having taken stock of our challenges and the time has now come to give my government’s development agenda fresh impetus and to give the Kenyan public a demonstrable example of my unwavering commitment to delivering on the promises of my Administration.

It is on this basis that I am announcing today the first of several far reaching structural and personnel changes that will go to the heart of the government. The changes are purposed to achieve four principle objectives.

The first objective is to enhance the efficiency of the public service. This will be done through fast tracking the adoption of technology, improving processes to reduce red tape, providing for better oversight and leadership at each level of government Administration.

The second objective is to ensure the accountability of public officials in the discharge of their mandate, this will be done by implementing the new Public Procurement legislation, better delineation of roles and responsibilities as relates to public expenditure and giving the necessary power and responsibility to accounting officers to make better decisions on budget management.

The third objective is to guarantee the accessibility of public officers to those whom they serve, this will be done by reducing the size of the dockets of state departments in to more manageable units and allowing those in charge to have better visibility of service delivery in their respective portfolios and more importantly to have time to engage with their key stakeholders as they execute the delivery of the government agenda.

The fourth and last objective is to review the effectiveness of government programmes and projects for the public good. This will be done by undertaking an audit of our short and medium term development deliverables to ensure that only those projects that have a direct impact on the socio-economic well being of the public make it through to the Cabinet for approval.

Fellow Kenyans, I will now turn to the specifics:-

Firstly, I have reviewed the scope of the existing ministries and I have increased the size of the Cabinet from the current 19 Ministries to 20 Ministries. I expect that this change will allow Cabinet Secretaries to focus better on their deliverables by eliminating some of the overlap that existed before and also through giving increased focus to important areas that will drive our economic growth. Each Ministry will be headed by a Cabinet Secretary.

Secondly, the role of state departments in each ministry has been identified as the key point of inflection for driving real change in the way we run government. It is clear from our past experience that some departments were far too large and difficult to administer, in some cases they were not aligned to key government objectives. Therefore after extensive consultations with the Public Service Commission I have increased the number of state departments from the current 26 to 41 in order to address these deficiencies. It is my expectation that a large number of our anti-corruption initiatives will be implemented through these state departments, in particular the overhaul of all procurement departments within the ministries and the state corporations under them. Each state department will be headed by a Principal Secretary.

Lastly, I will on a separate date be announcing a reorganisation of the Executive Office of The President in order to create the necessary structures for the effective coordination of my government and to improve my own ability to serve the Kenyan people more effectively. In this regard I will be signing a new executive order to reflect the changes to the coordination of national government entities. This will be circulated to all public servants within the next two weeks for their adherence.

I am now requesting the National Assembly to fast track the vetting and approval of those persons who are newly nominated as Cabinet and Principal Secretaries so that my team and I can get down to work as soon as possible.

Fellow Kenyans under the newly re-organised set up of Government, the following are the details of the Cabinet Secretaries and Principal Secretaries:-

KCPE: The girl who beat them all – VIDEO