Deputy President William Ruto on Friday spoke for the first time after the termination of the case against him and former radio presenter Joshua Sang at the International Criminal Court.

Addressing journalists at his Karen office, Mr Ruto said he has forgiven witnesses who testified against him in The Hague as well as individuals and civil society groups that “colluded, conspired to manufacture an evil narrative and hired, bribed and coached witnesses.”

“I pray that God, who vindicated me, will help you come to terms with the acts,” he said of ICC witnesses.

“My prayer is that the same God who vindicated me will help them come to terms with their evil acts and bring them to repentance,” he said of individuals and civil society, who he claimed hatched a plan to build a false case against him and Mr Sang.

He said the main reason the case was terminated was because of his innocence and not witness-tampering or political interference.

Mr Ruto was accompanied by his wife Rachel, mother Sarah Cherono and children. 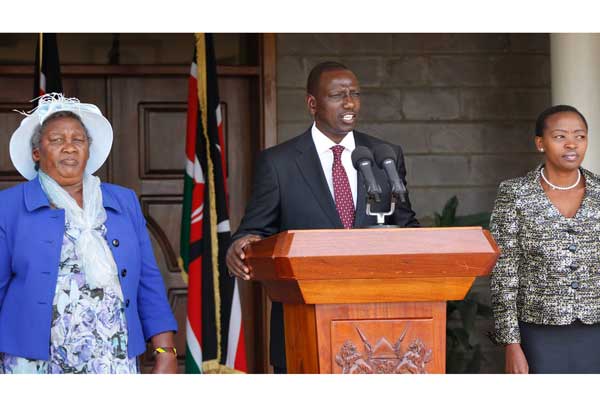 Deputy President William Ruto with his wife Rachel (right) and mother Sarah Cherono as he addresses journalists at the Karen offices on April 8, 2016. PHOTO | DPPS

He said the government will not rest or relent until every victim of the 2007-2008 post-election violence is attended to.

“The post-election violence marks a very sad and shameful chapter of our country…those who suffered across communities, religion and region.

“Because of their suffering they demand of us that we work earnestly on the path of reconciliation, peaceful co-existence and harmony,” he said.

He thanked his family, relatives, friends, diplomats, politicians and religious leaders for praying for him as he faced the trial in The Hague.

He described the period of the trial as “difficult six years of the case.”

He said he thanked God for giving his family peace of mind and comfort, saying “in difficult situations, God is in control.”

“Two very special ladies in my life, my wife Rachel, who fasted and prayed for me. She sneaked from our bed at night to go and pray. My mother Sarah Cherono prayed for me,” he said.

He added: “If the matter had gone any other way, she (mother) would have been devastated knowing how she brought me up…she did what every mother would do for a child.”