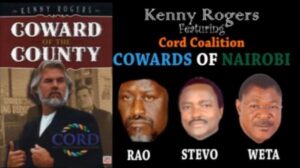 Cowards of Nairobi’ by Kenny Rogers

A video showing the moment the principals disappeared into their vehicles has been made into a song dubbed ‘Cowards of Nairobi.’ It is basically a refix of Kenny Rogers’ 1979 hit ‘Coward of the county.’