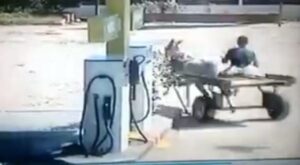 A popular Finnish proverb states that an accident won’t arrive with a bell on its neck. Road accidents not only involve motor vehicles but donkey carts too as one guy and his donkey came to find out recently.

A CCTV footage shared on the interwebs shows the moment the clearly overspeeding donkey cart tumbled over near a petrol station. You would think it was overspeeding as if to prove to petrol station attendants that it doesn’t need fuel to burn that rubber.

VIDEO: A Look At The Impressive Sh65 Billion Nairobi…

While the guy in control clearly suffered a terrible fall, guys on social media felt more for the donkey that fell flat on its back.

Shame:Proposal to raise Kibaki, PM sendoff perks to be tabled in House

Kenyan Family in America: Business Fails, Kicked Out of the House