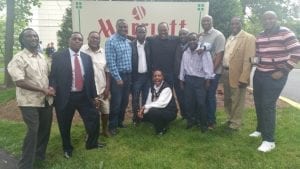 Kenyans of all walks from several States in the United States as well as representatives from Canada converged at Gaithersburg, Maryland on Saturday, May 21, 2016, to celebrate the official launch of Kenya United Diaspora Organization, abbreviated as KUDO.

A KUDO song, composed by Elizabeth Ekakoro, one of the KUDO moderators in Ukraine, was turned into lyrics and sung at the launch by KUDO members led by Caroline Wavai, a survivor of the 1998 American Embassy terrorist attack ( Click HERE to listen to the song). The powerful song asks all Kenyan in the Diaspora to unite as one, cherish the language of peace, preserve the Kenyan heritage, build a legacy for the future generations, and make a difference home or away.

Jeff Koinange, best known as Mr. Oh My, Oh My or Mr. What a show! produced the first ever JKL show outside Kenya in front of a banner that read…KUDO-Kenya United Diaspora Organization, One Diaspora, One Voice, and interspersed the show with a special panel led by the interim chairman of KUDO, Adoga Kiharangwa, as well as audience questions on the need to build a better bridge between Kenyans in the diaspora and those in the motherland so as to enhance development.

The panel and the audience discussed several issues on a variety of topics such as the need for Kenyans in the Diaspora to find a unity of purpose, voting registration exercises in the diaspora by IEBC, developing a manufacturing base in Kenya, and addressing the needs of children of Kenyan descent in the diaspora. Jeff Koinange reiterated on the power of uniting and shared snippets of his life that that are part of the book he has recently authored titled “Through My African Eyes”.

KUDO, a grassroots organization, has been founded in an effort to create a more inclusive and member run organization that is responsible to its members and Kenya’s best interest in the Diaspora. KUDO members are spread across the Americas, Europe, Africa, Canada, Middle East and Asia, and it is an attempt to create one diaspora, one voice in order to positively influence policy and share great skills as well as talent among Kenyans by utilizing the economies of scale, knowledge, and experience. Learn more about KUDO at the website www.kudovoice.com

KUDO is a non- political organization with a mission TO PROTECT AND ENHANCE THE RIGHTS OF KENYANS IN THE DIASPORA; TO PROVIDE A FORUM FOR KENYANS AND THEIR DESCENTS TO UTILIZE THIER KNOWLEDGE, SKILLS, AND ABILITIES TO DEVELOP AND PROVIDE ECONOMIC AND SOCIAL SECURITY FOR THEMSELVES, KENYA AND ITS PEOPLES.

It was evident from the positive responses of participants during the KUDO launch that those attending see the need to push for a united Kenyan diaspora that speaks with one voice on issues affecting Kenyans in the diaspora. The stories of success that were being told could be easily amplified and benefit more Kenyans in the diaspora if they were told with one voice and a unity of purpose. As Jeff, summed it, “if you build it, they will come”, and that each one of us has a powerful story to tell, not through the eyes of the observer, but through the eyes of the one who is living it.

KUDO launch was the start of a journey towards action and the coming months would open a window of several initiatives that KUDO would lead including that of providing a platform for Kenyan organizations in the Diaspora to enhance their successful programs as well as an opportunity for children descent to be inter- linked through specially planned programs.

Among the participants at the KUDO event were representatives from the Kenyan Embassy led by Mr. David Gacheru and Mr. James Nyatigoh, Vincent Makori, anchor of Africa 54, Voice of America’s English television live news magazine show.

KUDO event launch was streamed live to social media outlets such as Facebook through the efforts of Ron Imanene, of 360 TV Media. 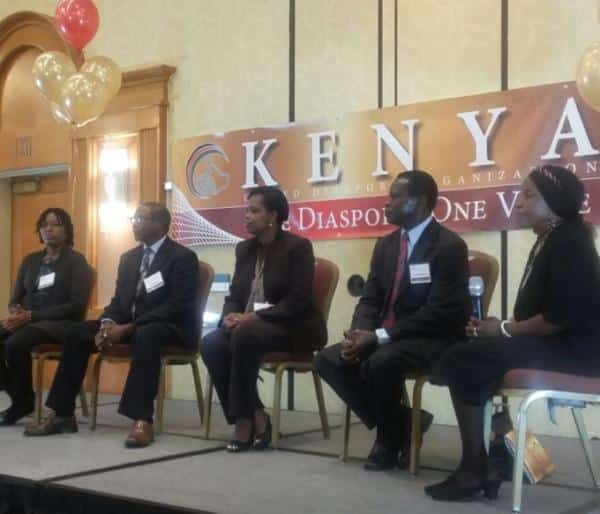