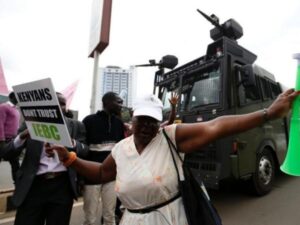 Questions are now abound following failure by some Cord strongholds of Ukambani, Western and Ukambani to join their counterparts in countrywide demonstrations against the IEBC.

Apart from Nairobi and Kisumu counties, the regions did not report protests against the electoral agency despite passionate appeals by the principals Raila Odinga, Kalonzo Musyoka and Moses Wetangula.

The trio had asked their supporters to turn out in large numbers and stage a sit-in at all the Independent  Electoral and Boundaries Commission offices.

Business went on as usual in other counties safe for Homa Bay, yet another Cord stronghold, and Kwale County where supporters of the opposition matched to the commission’s offices.

A spot check by Star has indicated that 16 towns were calm with normal activities going on as usual.

“All meetings outside Nairobi will be held at IEBC offices with emphasis on Mombasa, Garissa, Machakos, Nakuru, Eldoret, Kakamega, Kisii, Busia, Bungoma, Narok, Lodwar, Meru, Isiolo, Nyeri and Kitale. Kenya cannot and will not conduct another General Election under the IEBC as presently constituted,” Odinga declared.

Towns in jubilee strongholds including Eldoret ,Meru,Narok,Isiolo,Nyeri,Nakuru,Kitale and Girissa also gave a wide berth to the protest which turned chaotic in Nairobi.

At the same time Kibra MP Keneth Okoth asked leaders to stop inciting Kenyans saying those who want to win in the next elections should rally their supporters to register in large numbers.

“Youth to take IDs, sell to them your manifesto but not take youth to streets to be kill yet your children will not participate,” Okoth told a meeting in his constituency.

Issack Hassan:Kenyans have ‘resentment and anger’ over election results