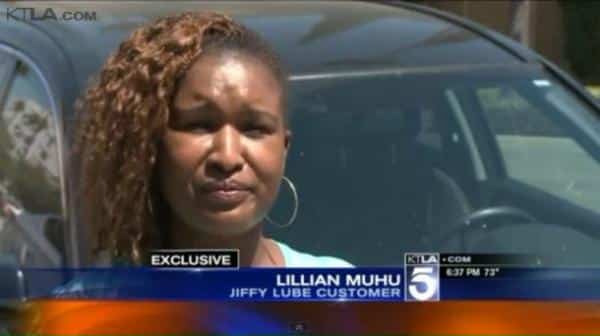 A woman who brought her car to a Jiffy Lube in Riverside for an oil change told KTLA on Tuesday that the vehicle was stolen from the business while she was sitting in the waiting room.

It happened sometime after 5 p.m. on Monday at a Jiffy Lube in the 3600 block of La Sierra Boulevard in Riverside.

While waiting in the service center, Lillian Muhu said she was approached by an employee who informed her that her car was missing.

Officers with the Riverside Police Department found the vehicle abandoned later that night.

Several items were missing from the vehicle, including the keys and Muhu’s Canon EOS 5D camera that contained pictures of her 5-year-old grandson taken before and after his recent surgery.

Muhu was asking the person who stole the car to return the camera and the pictures.

VIDEO:Kenyan woman’s car stolen at Jiffy Lube as she waits for oil change