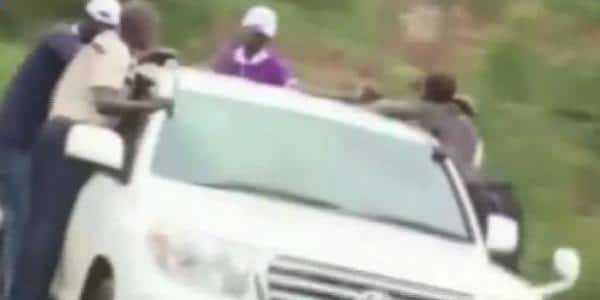 A group of rowdy youths on Thursday recklessly clung on a Member of Parliament’s vehicle for 20 kilometres, in a bid to have the lawmaker dish out money.

Reports indicate that the young men intercepted Emgwen MP Alex Kosgey’s Toyota Landcruiser V8  in Kapsabet Town, Nandi County, as he was coming from a Beyond Zero Campaign event.

In a video capturing the rather shocking scene, the young men are seen firmly holding onto the Mr Kosgey’s vehicle demanding handouts.

However, their efforts ended up being fruitless as the legislator did not bow down to their demands.

Last year, youth in Saboti Constituency narrowly escaped death as they hang on an aspiring politician’s helicopter. The hopeful MP identified as Caleb Hamisi had allegedly promised the youth Sh100,000, which he failed to dish out, prompting the youth to dash for his chopper.

DEVOTION:DO YOU HAVE THIS KIND OF FAITH?