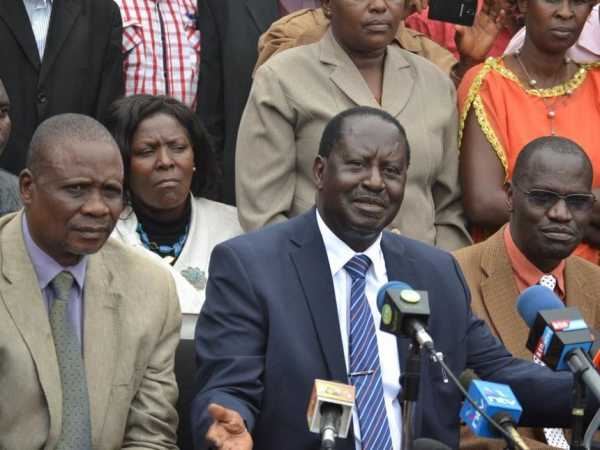 Raila met the leaders from the Maasai community barely a day after a section of elders met President Uhuru Kenyatta at State House.

The two have intensified their vote hunts by reaching out to opinion leaders from communities whose support they want.

Philip Etale, ODM’s director of communications, said in a statement that Raila’s meeting was part of “networking and establishing new camaraderie”.

Among those who met him at the party’s Orange House headquarters in Nairobi were politicians and decision makers.

Etale said the Cord leader will address the media after the talks.

Raila declared he will vie again despite losses in 1997, 2007 and 2013 while Uhuru expressed confidence in winning a second term.

He promised the State House meeting on Tuesday an “exciting” future come the August 8, 2017 general election.

When Uhuru met the Maa community , some leaders from Narok and Laikipia announced that they were ready to join Jubilee Party .

They said their announcement was the culmination of discussions within the Maasai community.

Raila warned of a tough contest in the election following a meeting with Kisii leaders just after one by Uhuru.

Uhuru hosted 87 MCAs from Kisii and Nyamira counties at State House in a bid to penetrate opposition strongholds.

But Raila said more than 80 per cent of Kisiis will vote for ODM, despite the carrots being dangled by Uhuru.

The Cord leader has also cautioned Jubilee against creating monolithic party systems, terming it an abuse of the constitution.

More presidential candidates are likely to surface as the election date approaches. Among those who have declared interest are Amani’s Musalia Mudavadi and Ford-Kenya’s Moses Wetang’ula .

The polity seems to be going the direction of how much one rallies a community to his/her side.

Most of these will either to go it alone or forge coalitions that will determine the fifth President of the republic of Kenya.