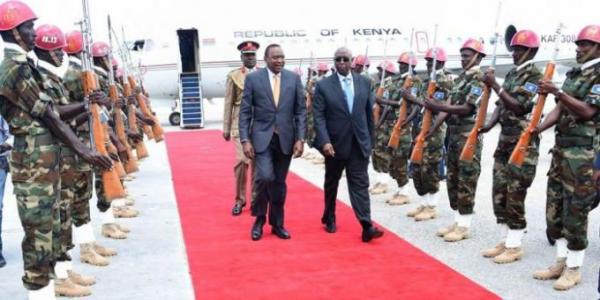 President Uhuru Kenyatta on Tuesday flew to Somalia for the 28th IGAD Extra-Ordinary Summit to discuss the progress Somalia had made towards entrenching security and stability.

Surprisingly, President Kenyatta’s trip to the neighbouring country came as a huge reprieve to miraa farmers in Kenya, as the recent ban imposed by Somalia on the crop was lifted.

The announcement, which was made after bilateral talks between Kenyatta and President Hassan Sheikh Mohamoud, will see planes carrying miraa from Kenya resume flights on Wednesday.

Last week, Somalia announced the sanction by restricting all flights ferrying miraa from Kenya into the region.

According to Somali Ambassador to Kenya Gamal Hassan, Meru Governor Peter Munya’s visit to Hargeisa in July had compelled Somalia to ban the trade since he had caused more rift in the region.

Munya was accused of causing diplomatic tension, allegations he denied.

Miraa traders had gone on a rampage protesting against the ban by one of their major markets.

President Kenyatta’s visit to Somalia, which is the first tour by a Kenyan President in 30 years, also saw the two heads of state agree to open a Kenya Commercial Bank (KCB) branch in the neighbouring country.