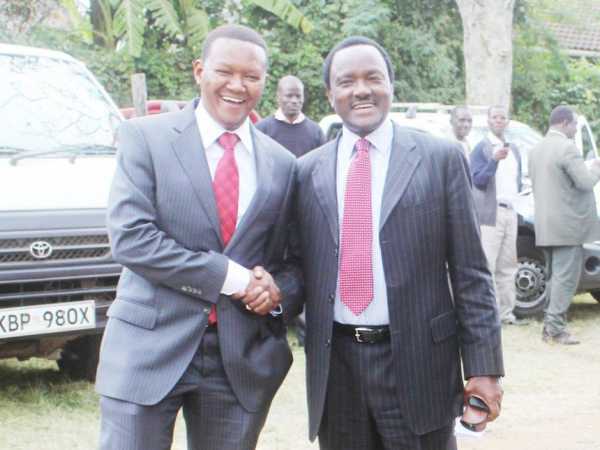 Machakos Governor Alfred Mutua and Wiper leader Kalonzo Musyoka shared a vehicle during the burial of the late William ole Ntimama sparking speculations on what may have transpired.

A light downpour that began as the service closed offered an opportunity for the two Ukambani political kingpins to share an umbrella and a car ride.

Mutua offered Kalonzo a ride from the venue of the funeral service at Ntimama’s Motonyi home to the grounds of the Ole Sankale Primary school where their helicopters had been parked.

They engaged in talks immediately after alighting from the vehicle before Kalonzo got into his helicopter.

Mutua said on Thursday that the shared ride was a gesture of brotherhood.

He said he and Kalonzo have respect for each other and that politics of hate and division have no room in this age and time.

After pact with Uhuru, Kalonzo gets security detail back

But attempts to reach Kalonzo for comment were futile.

Kalonzo and Mutua have not shared a platform in the recent past due to what observers say is their political differences revolving around Wiper and Maendeleo Chap Chap.

Mutua has openly defied the Wiper Party by charting an independent political path insisting that his agenda was the pursuit of politics of development and not those of poverty and regional supremacy.

”The Maendeleo Chap Chap movement will offer a vehicle for political and economic transformation in Machakos and other parts of the country,” Mutua said.

Mutua added that the movement will be committed and faithful to the improvement of our way of life so as to effectively deal with poverty.