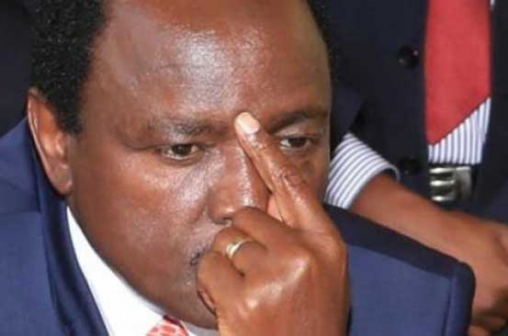 An acrimonious fall-out of two partners in one of the country’s most prestigious law firms has set the stage for protracted suits and counter suits. The row pitting ex-partners in NASA leader Kalonzo Musyoka’s law firm, has roped in the Judiciary, the anti-corruption agency, an independent commission, the Law Society of Kenya (LSK) and arbitrators. In its heyday, the law firm Musyoka & Wambua Advocates was associated with the former Vice-President and former constitutional review commissioner Prof Paul Musili Wambua.

With Kalonzo doing the political bidding and Wambua being the hands-on manager, the law firm was doing pretty well. In March 2009, the firm re-admitted its former pupil John Katiku as a partner and a chain of events, in quick succession, led to splitting up of the firm a few years later following irreconcilable differences between Katiku and Wambua.

The firm had been founded in April 1989 by Kalonzo, then a powerful minister in the Kanu government, and Wambua, a budding lawyer at the time. In the mid-90’s, another lawyer William Musyoka, now a judge, joined as a partner. In July 2013, Wambua withdrew from the firm and founded Prof Musili Wambua & Company Advocates. Kalonzo left a few months later in December to found Musyoka Murambi & Associates. The other Musyoka had by then become a judge and Katiku was left with a shell of the original Musyoka Wambua & Katiku Advocates which he runs to date.

The details of the fall-out and its effects are bared in a lengthy petition to the Council of the Law Society of Kenya filed in July 2015 by Wambua and now obtained by The Standard on Sunday. “After the petitioner withdrew from the partnership of Musyoka Wambua & Katiku Advocates, the petitioner has faced in quick succession no less than five complaints of professional misconduct, all either directly or indirectly instigated/sponsored by Mr John Katiku.”

“All the complaints of alleged professional misconduct arise from disputes relating to the dissolution of the partnership currently pending for arbitration by Nzamba Kitonga. Indeed, although it is the petitioner who initially suggested arbitration, it is Mr Katiku who assumed the role of the claimant in the arbitration process,” the petition reads. Among the complaints is one filed against Wambua by Katiku with LSK’s Disciplinary Committee relating to alleged misappropriation of clients’ funds. Wambua not only denies the accusations but also raises similar complaints against Katiku. He claims Katiku brought the law firm into disrepute through his actions and hence his withdrawal. In January this year, Kalonzo officially quit the law firm through a notice in the Kenya Gazette. Before the firm split and in the sunset days of the Kibaki presidency, Wambua’s appointment as the chairman of Betting Control and Licensing Board (BCLB) ran into headwinds after an organisation demanded that he choose between the appointment and his associate dean position at the University of Nairobi.

Wambua opted to resign as associate dean, Kisumu Campus but the petitioner upped the game and demanded that he quits the BCLB as he was a public university lecturer. Wambua opted to go to court to have the matter determined there. In the petition, Wambua says forces opposed to his appointment closed ranks with Katiku to fight him at BCLB. He eventually lost out in the court and moved to the Court of Appeal soon thereafter where the matter was still pending when his term ended last year. President Uhuru Kenyatta has since appointed him the chancellor of Embu University. Contacted for his side of the story on the splitting up of the law firm, Katiku insisted it was a private matter devoid of public interest.

Musyoka did not respond to our inquiries. ******************* The latest face-off between the ex-law partners revolves around Sh10 million short-term loan advanced to Wambua’s client by their mutual friend John Ngumbau. As per the deal, the client, Michael Mwongera and his company Explorer Holdings, was to pay back Sh20 million within a month of borrowing, that is by July 15, 2016. To cover for his client, Wambua issued an undertaking that the money will be paid, gave a personal guarantee on the payment and issued several post-dated cheques amounting to the full Sh20 million payable from his Chase Bank account.

What happened next is the stuff that fiscal intrigues are made of: Mwongera dithered in payment, Wambua recused himself from his undertaking and guarantees and Ngumbau, recently appointed to chair the Mumias Sugar board, was Sh10 million poorer. On December 14 last year, the law firm which represented Ngumbau in the deal — CM Advocates — informed Wambua’s law firm in the deal MM Gitonga Advocates, that it had passed on the matter to John Katiku & Associates Advocates to enforce the terms of the agreement. Wambua through MM Gitonga protested at the choice of Katiku’s law firm on account of their pending dispute. But Katiku moved with speed and on the same day announced his presence in the matter through Musyoka Wambua & Katiku Advocates, not the John Katiku & Associates in CM Advocates letter.

Katiku threatened legal proceedings in five days time. But Wambua upstaged him and locked the matter in an ongoing court case. According to court records, Wambua claims he pulled out all his cheques after Mwongera and Ngumbau met and mutually agreed that he (Mwongera) would issue his own cheques amounting to Sh12,350,000 to Ngumbau as security for the loan and in replacement of the original cheques issued by Wambua. The agreement altered the terms of the undertaking and guarantee he issued, he said. Consequently, he wrote to Ngumabu’s law firm communicating this ‘side-agreement’ and asking them not to bank the original cheques. He also wrote to the bank cancelling all the initial cheques but the law firm proceeded to bank the cheques in December, many months after they were due.

In his defence, Ngumbau argues that the loan was advanced to both Wambua and Mwongera and not to Mwongera alone. He also denies cutting a side deal with Mwongera and has vowed to put Wambua to strict proof of his claims. Ngumbau also says Wambua has not shown how Sh12,350,000 worth of cheques would replace a debt of Sh20,000,000. On Monday, Wambua threatened a separate legal suit against his own client Mwongera after a newspaper article quoted him (Mwongera) saying he was used as a hoax by Wambua to defraud Ngumbau. He has since moved to court. All the matters are pending in court.