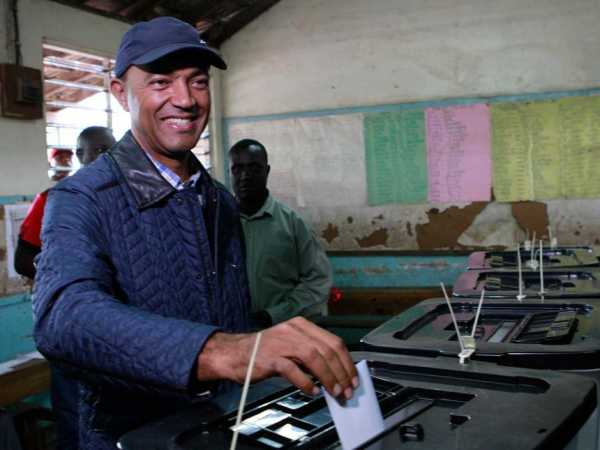 Former Gatanga MP Peter Kenneth has rejected the Nairobi governor’s results saying the nomination was not free and fair.

“I disassociate myself from the sham election that Jubilee Party purported to have and demand the same elections be nullified,” he said in a statement on Thursday.

As of Wednesday night, his competitor Mike Sonko was in the lead.

In Langata constituency, Sonko garnered 7,727 against Kenneth who got 2,431. The vote counting is still ongoing with results showing Sonko may be headed to a landslide win.

The two are in the race to unseat Nairobi governor Evans Kidero in August polls.

Kenneth called for a repeat of the nominations adding that Jubilee Party only indicated on the eve of the elections that the voting would be on the basis of an identity card.

The party said they had received reports that there were people who infiltrated Nairobi primaries.

Elections board chairman Andrew Musangi said this was the reason most people could not find their names in the registers.

Kenneth said after the announcements by the party many constituencies did not have the party registers as indicated.

“…and they continued the use of IDs. When the register was introduced halfway voting, many voters who were registered party members had their names missing,” he said.

The Nairobi Governor aspirant had asked Jubilee Party election officials to address the ‘few irregularities’ in the ongoing nominations.

“It is important to note that there are hiccups and I think the party should address them,” he told journalists after casting his vote at Bidii primary school.

Kenneth complained that some people were allowed to vote despite their names missing in the registers while others were denied the chance.

Kenneth further said the presiding officers used a marker instead of indelible ink which he said was easily washed off.

“This facilitated multiple voting. There were also cases of a massive number of voters imported from Kajiado and Machakos counties,” he said.

He claimed the voters were transported to vote throughout the county with their IDs.

“The trend in various polling stations indicated that there was a scheme to transport a particular organised group to vote,” he said.

Noting that there was bribery during the nominations, Kenneth said a number of polling stations were opened late and closed early.

“There were cases of outright bribery by some of the candidates outside polling stations to alter the true voting outcome,” he said.

Raila compares the African Union to fish with a rotten head

WHY MUSALIA SNUBBED UHURU IN KAKAMEGA