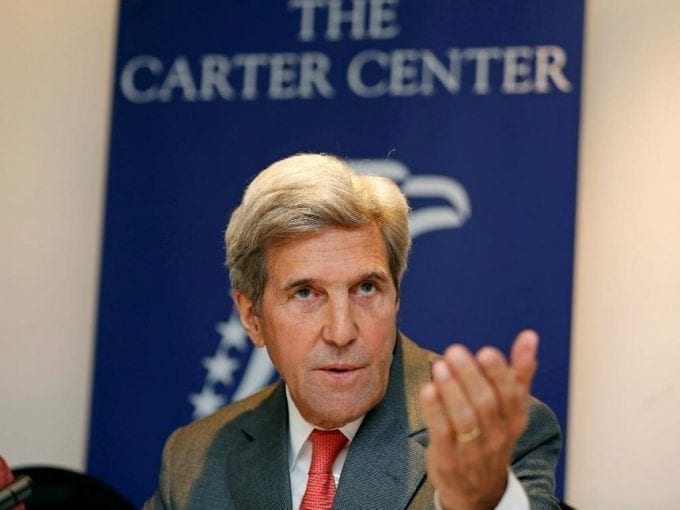 Former US Secretary of State John Kerry has said it is too early for any party to contest presidential results.

Kerry, who is leading a delegation of international observers from Carter Centre, said the results can only be contested after declaration by IEBC.

“We are not taking sides of any political affiliation. All we are saying is the [electoral] commission will let the will of people speak,” he told the press on Thursday.

Kerry said the test of Tuesday’s general election will be determined through a detailed process of ballot counting.

“It is up to the electoral commission to ensure the rights of any registered voter who with a lot of patience and calmness braved the long queues to cast their vote,” he added.

Observers have for the most part termed the election credible and transparent but asked IEBC to look into hacking claims.

Ghanaian Justice Minister Aminata Toure said the voice of Kenyan people will only be heard if the commission implements its mandate in accordance what is stipulated in the constitution.

Toure said the two political leaders should accept the verdict of IEBC and carry on with the political commitment .

“A thorough review of technology used [should] be undertaken, with consideration of alternative means of providing for electoral integrity,” read the statement from the EU.

Former Ghanain president John Mahama called for calm saying the electoral commission should be allowed time and space to finish its work.

He also released results from his parallel tallying centre, showing he had 8.1 million votes against President Uhuru Kenyatta’s 7.2 million.

IEBC has said it will announce the winner of the presidential race on Friday.

Word of the Day:Willing to pay the price

Who Would Christ Vote for in Kenya’s Next Election? I Think I Know!