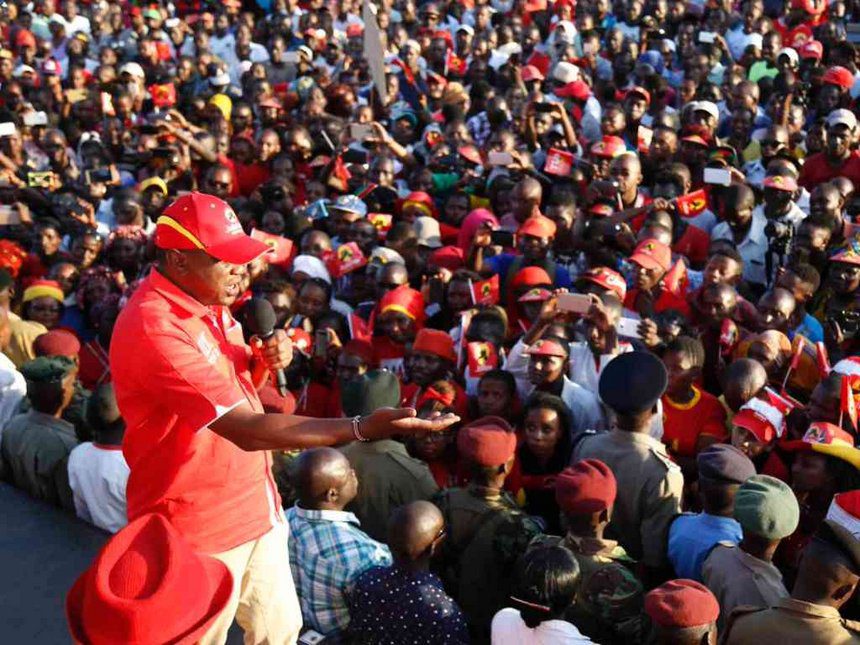 The President and DP have condemned Raila Odinga saying he has subjected Kenyans to injustice by withdrawing from the election.

But Uhuru Kenyatta and William Ruto have welcomed the NASA chief’s decision saying they are ready to be on the October 26 ballot.

“I hear he has withdrawn after making us spend Sh12 billion. That is injustice to Kenyans because that money could have been used on other development projects,” Uhuru told Voi residents on Tuesday.

IEBC has requested Sh13.79 billion for the fresh presidential election.

Embattled CEO Ezra Chiloba told a Special parliamentary committee scrutinising the Supplementary Budget that the sum will cater for services and the purchase of election materials.

Raila withdrew from the race earlier today and demadned that IEBC calls a fresh election. The former Prime Minister said it is only through his withdrawal that the country will have a free and fair election as per the law.

Uhuru said: “We are however ready for the election. It is the people’s right to participate in an election to choose their leader. The people will decide. There is no constitutional clause stating Raila must be on the ballot for us to have an election.”

“RAILA SHOULD LET KENYANS MOVE ON”

The President said he is confident he will defeat Raila again, and by a larger margin, should the election take place as scheduled.

He said Raila knew, even when “he forced the nullification” of the August 8 election outcome, that he cannot win majority votes, and that this is why he is not hunting for votes.

“They are always at press conferences. But we are here to ask Kenyans to give us more votes again,” he said, adding Raila wants to run away from the election.

Uhuru said his rival is free to quit the election if he wishes as this will allow Kenyans to carry on with their lives.

“From the day the court said we would go back to the election, our opponent has been coming up with excuses. Yesterday I said he wants to withdraw,” he said. 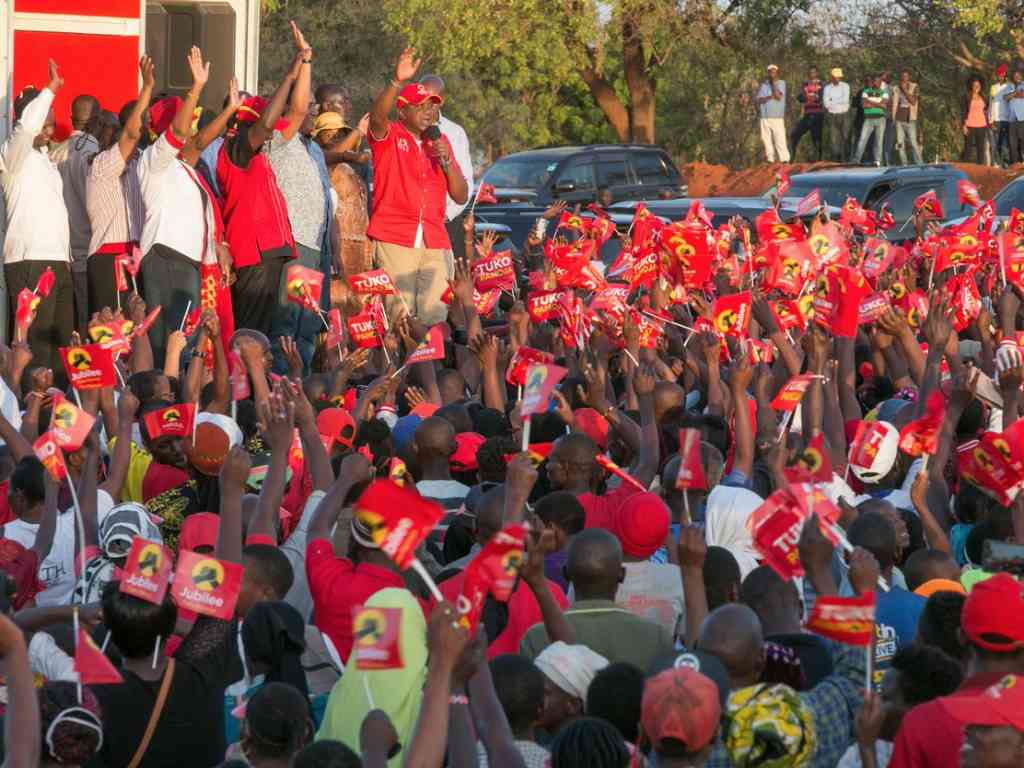 “If he is not ready for the election let him step aside so Kenya can continue with its development. We will go on with developing Kenya, building roads and providing services that Kenyans need.”

Uhuru said Parliament is right to change election laws to prevent a situation where the outcome of the fresh election is challenged again and “nullified on grounds that are not integral to the election process.” He thanked the people for voting for him last month.

Uhuru, who also toured Amason Kingi’s Kilifi, said his administration will continue developing the county for the people’s sake.

He said they will also grow parts of the country whose people “always fall for empty rhetoric from the Opposition”.

The President noted Jubilee has constructed more roads that any other regime and that they will continue doing so for the next five years.

In Kilifi, he and Ruto cited Kaloleni-Mavueni road which has already been completed, Mariakani- Bamba and Malindi- Sala Gate which are ongoing projects and Marafa-Sabaki road.

They also highlighted the tarmacking or roads in Kaloleni town as one of may initiatives taken to change the face of Kilifi.

The President said the National Super Alliance has specialised on propaganda to hoodwink many Kenyans on realities including the outcome of the August 8 election.

“If there is any cup our opponents can win easily. It [NASA] is the one for propaganda and many people fall for their propaganda.”

Uhuru said the ruling coalition trounced NASA at all levels in the August poll and this is proven by Jubilee’s control of county assemblies, the Senate and the National Assembly. 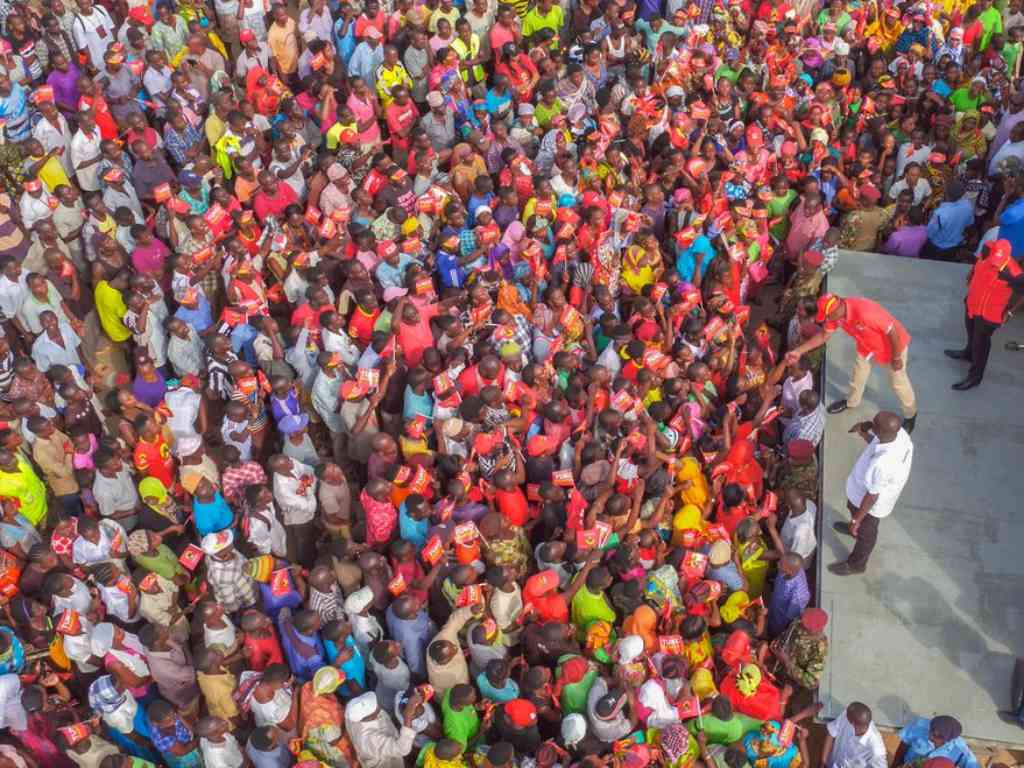 Ruto said the election was nullified upon Raila’s “request” and noted he has no justification for coming up with endless excuses to avoid the contest.

“He is the one who went to court and the court ordered a fresh election. The electoral commission has set a date…Kenyans are ready to resolve the issue at the ballot.”

The Deputy President further said Raila, who is ODM leader, should have withdrawn from the initial race to ensure Uhuru’s swearing-in.

He asked the electoral agency to give the way forward so Kenyans get past the election season.

“We are also ready to swear in Uhuru if the IEBC declares the president should be sworn-in on grounds of no competition,” he said.

“The people of Kenya made a decision on August 8 and this is being proven as time goes by.”

The leaders assured residents they will unite all elected leaders to ensure services are accessible.

“We as Jubilee have the majority of leaders under our party, from MCAs to governors, but we have moved on from campaigns and are working to unite all leaders including your own Governor who was elected under Wiper because we want to serve Kenya as a team.”