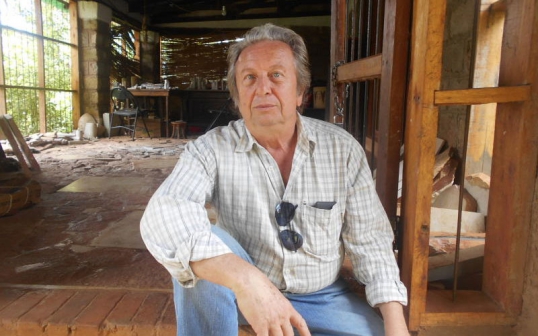 He not only came, saw and conquered the Agagusii territory, but also realized   his long cherished dream of becoming a polygamist. He also became a stone carver and village businessman, thousands of miles away from home.

Italian Michele Capri, 70, loves Kenya so much that he has no intention of going back home. He says Kenya has allowed him to practice polygamy, a culture not allowed in his country.

Besides his three wives and children, he is also in deep love with the scenic Tabaka hills, in the outskirts of Kisii Town, where he has become a honorary Abagusii elder.

He first came to Kenya in 1985 as a tourist, not knowing that he will end up staying in the country becoming a Citizen with no intention of ever going to stay in his home country again but only for short visits.

Capri who is an Interior Designer had traveled from his home City of Milan to Malindi Town where he was happy to find many people from his home country residing in the Coastal Town and would travel to the country often after holidays.

“I have travelled around the world and I can testify that Kenya is one beautiful country, that is why I decided to settle here in order to engage in my hobby of making soapstone carvings which I used to sell locally,’’ said Capri.

The father of seven children is married to three wives, two of them Kisii and one a Kikuyu and has homes in Nairobi and Kisii.

“My two eldest children are with my first wife a Brazilian whom I am divorced, the third one is with an Italian woman, while I have four children with my three Kenyan wives who make me feel very happy, even though I am white, I am an African at heart,’’ said Capri.

When The Nairobian visited Capri’s home at Tabaka area it was very clear that this was the home of an art lover with the interior decorated with Soapstone starting with the floor, the walls, the sinks in the kitchen and bathrooms.

“In the 1990s and early 2000s I had a successful business in which I exported tens of containers of Soapstone carvings to Europe and America earning Hundreds of Millions of shillings most of which I ploughed back to the Tabaka community through contribution to various projects,”

Capri said that he paid school fees to many School children from disadvantaged backgrounds, paid Hospital bills for community members who could not afford them besides participating in other charitable endeavours in his adopted home.

The Italian said that he was disappointed because some people took advantage of his magnanimity to con him but he has no regrets since they most probably used the money to for the wellbeing of their families.

The Italian urged the Kisii County Government and the National Government to support the Soapstone mining and carving business since it has been neglected to the periphery despite the huge potential that exists in the industry.

Capri said that the government needs to sponsor local Soapstone carvers to Europe and the Middle East in order to see for themselves ancient civilization so that they can improve their Soapstone carving skills.

The Italian believes that the Soapstone Business in Tabaka is not as vibrant as it was 20 years ago with most talented carvers who used to earn around Ksh 500 per day leaving the business to engage in Boda Boda business where they earn around Ksh 1,000 per day.

Besides his native Italian and English, Mosimbiri as he is called by the locals is fluent in Kiswahili and Ekegusii.

Fidel Odinga speaks of plan to vie for Kibra MP