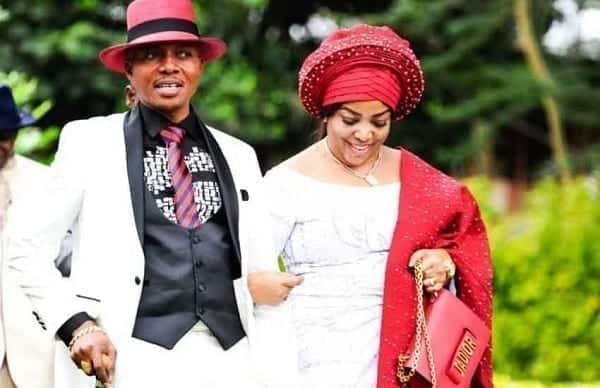 The Ngong Racecourse was over the weekend dotted with elegance and opulence as the daughter of Sofapaka Football Club owner Elly Kalekwa said ‘I do.’

The Congolese football manager who built the Kenyan KPL side from scratch to winning ways, spared no cash in seeing off his daughter Rachel Kalekwa as she wedded Peter Guniah.

On hand were prominent personalities including Size 8, Solomon Mkubwa, Lady B and Christina Shusho among others.

In 2017, Kalekwa told The Nairobian that he has spent Sh1 billion on the ‘Batoto ba Mungu’(God’s children) since founding the club in 2004.

The Prezda’ (President) as he is popularly known, disclosed, at the time, that the lowest earning player took home Sh60, 000 while the highest pocketed a cool Sh120, 000.

“Sofapaka was the first team to own a bus, to have an office, and to have proper contracts and attractive salaries for players. I professionalized football in Kenya,” said Kalekwa.

That same weekend, the son to Maximum Miracle Centre founder Pastor Pius Muiru was also exchanging vows with his fiancé at CITAM Karen.

Andrew Young Muiru walked down the aisle with his long-time girlfriend Edna Wairimu and treated their invited guests at the New Rain Hotel along Kenyatta Road in Juja.

Here are some photos of Kalekwa’s daughter wedding.