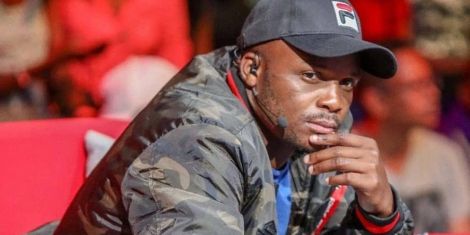 On Tuesday, November 12, a Twitter hashtag #MileleFakeNews was used to gang up against the presenters who had spoken on the Jomo Kenyatta University of Agriculture and Technology (Jkuat) protest that had caused uproar over police brutality. The duo was accused of stating that the students had attacked civilians who retaliated, a notion which Bruce Akatch, the Secretary-General of JKUAT’s student body denied.

The university was shut down indefinitely after the protests turned ugly following police intervention, on Monday, November 11.

Netizens further accused the two of making jokes on police brutality and supporting insecurity. However, Jalang’o took to Twitter to defend themselves and posted a podcast of their morning show, to highlight that KOT had misinterpreted their sentiments.

In the video, Jalang’o and Mwakideu were of the perspective that the students should have sought to have their grievances internally and amicably. They also tore into the police for brutally assaulting the students.

“Reports have it that the students attacked civilians who were stuck in the traffic jam on Thika Road. The civilians, out of anger, zeroed in on the students and retaliated. When the police arrived, they continued roughing up the students,” Mwakideu stated while reprimanding the students for apparently initiating violence into their demonstrations.

Jalang’o, noted that it was wrong for the students to attack residents who had nothing to do with their grievances. He also lauded Interior CS Fred Matiang’i for swinging into action and arresting the rogue police.

“What mistake did they make to be brutally assaulted by students? That video is so heartbreaking,” Jalang’o added.

The duo also called Bruce Akatch, Secretary-General of the university’s student council who confirmed the incident, stating that the students rioted after rogue police launched attacks on them.

“We were demonstrating peacefully until police combined with civilians to attack us. The students were then propelled to fight back. The reports that the students attacked civilians first is wrong,” Akatch defended.

While speaking to Kenyans.co.ke on phone, the comedian warned online users of misreporting and misinterpreting facts.

“Before you tweet, you should have facts. You can see for yourself from the video that our content was misinterpreted,” Jalang’o stated.

The police officers captured on video clobbering a helpless Jkuat student were identified and interdicted on November 12, 2019.

Inspector-General of Police Hillary Mutyambai issued orders for their apprehension after the viral video of the brutal assault was used to positively identify them.

Experience Deliverance From Hurts And Curses Conference in Gaithersburg MD