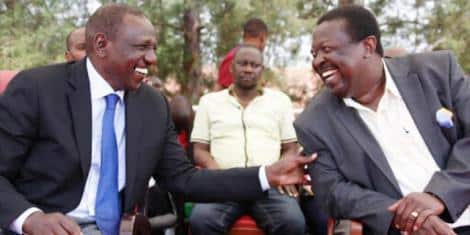 Two separate meetings, one convened by the DP early in the day and another by the ANC boss with some of his trusted lieutenants, left little doubt on the extent of the coordination that went into the planning.

Ms Beatrice Adagala, the woman representative of Vihiga, Mr Mudavadi’s county of birth and Matungu MP Justus Murunga – both elected on ANC ticket – attended both the “Mulembe” meeting and the one convened by the DP in the morning.

“The meeting brought Jubilee (those from Western allied to the DP), ANC and Ford Kenya together. We have agreed to join forces to address the challenges facing our people. We have been treated badly and it is time this changed,” said Mumias East MP Ben Washiali, who was recently dropped as Majority whip.

But careful not to name the DP in the larger scheme at the moment, Mr Washiali said the committee will report to the “principals” on the way forward before the year ends.

The report, the MPs said, will be accompanied by “far-reaching announcements” by the principals.

Kimilili MP Didmus Barasa, who also attended the meetings, said there was no looking back “given the tribulations” the DP has faced in the ruling party.

“We’ll forward two names of those from the Jubilee side who will represent us in the committee,” he said.

The meeting, which came the same day the courts referred the leadership wrangles in Ford-Kenya to be resolved internally, was billed as one to bring all Luhya leaders to speak in one voice on matters affecting the Western region. But the Ruto factor erodes this, some observers said.

Even as the row was being returned to the party for internal settlement, Registrar of Political Parties Ann Nderitu maintained “the Gazette Notice No. 3893 of June 8, 2020 pertaining to intention to change Ford-Kenya Party officials still stands.”

Now, with all pointers that the marriage between Rift Valley and Mount Kenya in 2013 was built on quicksand, the DP is betting big on Luhya support to propel him to the State House once his boss Uhuru Kenyatta retires in 2022.

At the Karen meeting, which lasted about two hours, the DP reportedly gave the team his blessings to meet with Mr Mudavadi and his troops in what some of his handlers now say was a way of telling the world that the indefatigable politician from Sugoi is not without options in his march to the House on the Hill.

“The boss asked them to talk to Mudavadi and Wetang’ula and explore ways of working together going forward. He appreciates the fact that time is of essence,” a source at Dr Ruto’s office said.

The country is looking at more realignments, with Mr Kenyatta and his fierce rival in the last presidential election, ODM leader Raila Odinga, now working together in the name of the handshake.

Mr Mudavadi and Mr Wetang’ula, two of Raila Odinga’s colleagues in the last elections, seem to have had enough of the friction in the National Super Alliance.

There is talk that should he be convinced that the forces out to stop him from ascending to power are way too strong to weather, Dr Ruto may opt to front someone else for the presidency in the hope that the laws will be changed to create the position of executive prime minister.

He would then give it a shot through Parliament.

At the same time, the planned elders’ meeting in Vihiga this Sunday to be attended by Kakamega Governor Wycliffe Oparanya and Devolution Cabinet Secretary Eugene Wamalwa may have sent shockwaves across the region.

The meeting at Mr Mudavadi’s Riverside Drive residence, where he hosted 23 MPs from Western Kenya, it is believed, was meant counter the Vihiga meeting.

All the governors from the other four counties of Western Kenya are expected to attend the Vihiga meeting.

But in a statement Mr Mudavadi issued after the meeting, he said that it had nothing to do with politics but about economic empowerment of the region.

“We note with profound concern that the sugar industry, which has been the mainstay of our economy in Western Kenya, remains marginalised,” Mr Mudavadi said.

“We are left wondering whether this is a factor of the state giving up on the industry, or is it erroneous human omission, or deliberate marginalisation. This must be corrected immediately.”

But not a single MP who attended the meeting has brought a motion or a Bill in Parliament to address the issues.

Mr Mudavadi said the MPs will scrutinise the budget and comment on it “in the coming days”. He however, noted that the budget had marginalised the region.

Yet some of the MPs who attended his meeting had the opportunity to raise the issues during the budget-making process.

“The government has previously foregrounded marine life as the next frontier of economic investment and growth. We, the leaders from Western Kenya, would like to fully understand what the blue economy should mean for the people of Western Kenya and the entire Lake Region,” the ANC leader said.

He decried the state of overcrowding of trucks at the Kenya-Uganda border in Busia.

“If the cause is fear of the new coronavirus disease, then our people who live adjacent to the border have every reason to be very afraid.”

The other MPs who attended the meeting include Ayub Savula (Lugari), Petronillah Were (Nominated), Bishop Titus Khamala (Lurambi) and Aseka Miradi (Khwisero).

Grand reception as Uhuru arrives back from The Hague

Linturi and company told to quip if unhappy with pay