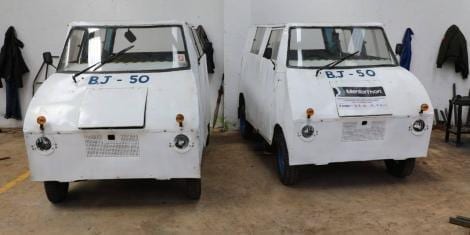 The Government on Wednesday, July 22, announced a partnership with Sagak AutoTech to kickstart the process of mass producing cars.

The car company got the partnership through Kenya Export Promotion and Branding Agency which is a government organisation whose mission is to brand Kenya, export Kenyan products and build Kenya.

In a statement, the agency announced the partnership opened the door for the company to sell their cars beyond the country’s borders.

“Kenya Export Promotion and Branding Agency is collaborating with Laikipia County to assess the needs of up-scaling the Sagak Auto tech plant and build capacity to produce for the local, regional and international markets,” read the statement.

It has been a successful week for Sagak as Ministry of Trade Cabinet Secretary, Betty Maina on Thursday, July 17 officially opened the assembly line.

Sagak’s factory is situated in Nyahururu, Laikipia County where all the assembly and production of the car is done.

Maina endorsed the car model christened Laikipia BJ-50 and noted the Government would offer its support in production and marketing to stimulate economy.

The car goes for about Ksh450,000, has a capacity of seven passengers and achieves a maximum speed of 70km per hour.

Back in 2019, according to an article on the Laikipia County Government website, the car had already received 26 orders from influential personalities.

The car however received some backlash from Kenyans who claimed that it was overpriced with some likening it to smokie trollies.